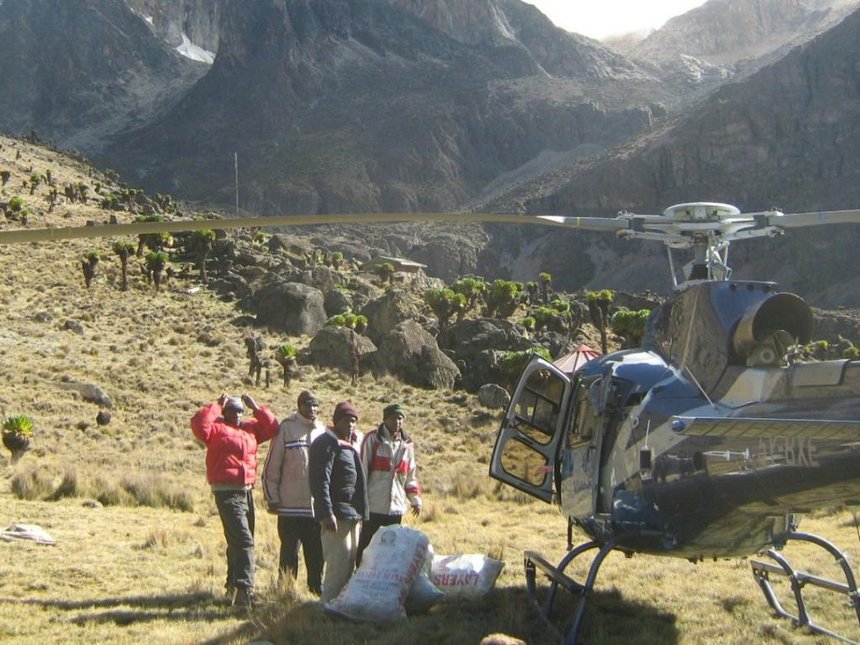 Guides and porters load garbage into a helicopter at Mt Kenya. Rescue teams and security agents have been searching for the couple who got lost on a hiking expedition on September 30 / FILE

Security agents are yet to find a couple who allegedly got lost in Mt Kenya during a hiking expedition in September.

Mt Kenya National Park senior warden Simon Gitau said rescue teams and security agents have been searching for the young couple in vain. He said the search was being extended to remote areas within the expansive park.

They left a note indicating their parents should not look for them.

Security agents suspect the couple was on a suicide mission, but wonder why their bodies have not been found.

The note, which was left by Mwendwa, read they wanted to “go and live with our maker.” Since their disappearance, search teams have been combing the mountain in vain.

They have also been using helicopters to search for the couple. The disappearance was reported at Timau and Kerugoya police stations.

On September 30, the couple hired a taxi to take them to Old Moses Camp.

Gitau says the two were spotted by a worker at Shipton’s Camp as they approached a Kenya Meteorological Department station, which is about five kilometres from Old Moses Camp.

“But when they saw the man approach, they took a turn towards the meteorological camp and went up the mountain,” Gitau said.

He said the disappearance was mysterious and is raising queries since the duo switched off their phones after they arrived at the camp.

“The entire region covering the Sirimon Gate, Old Moses Camp up to the Meteorological station is well covered with all mobile phone networks. We wonder how they could not be reached on their cellphones,” Gitau said.

He said the authorities are in communication with the families of the missing persons as the search continues.

Guides and porters load garbage into a helicopter at Mt Kenya. Rescue teams and security agents have been searching for the couple who got lost on a hiking expedition on September 30 / FILE Hikers ‘suicide mission’ likely, say searchers Security agents are yet to find a couple who allegedly got lost in Mt Kenya