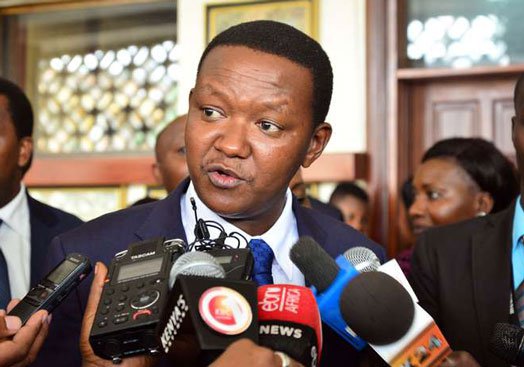 By NAIROBI NEWS REPORTER
Machakos Governor Alfred Mutua has ordered striking doctors in his county to report to work on Thursday morning failure to which they will be sacked.Mutua added that he has started the process of importing doctors from Tanzania, Uganda, Egypt and India to replace striking medics.

The imported doctors will work in place of the Kenyan medics who will fail to report to work on Thursday.

“I have told striking doctors that the curse of patients who died because they are on strike will be on their heads forever,” said the governor.

President Uhuru Kenyatta flanked by all 47 governors on Tuesday rejected a doctors’ salary deal negotiated by the country’s most senior clerics.

“If this round of talks fails… we will sort them out,” he said, but did not elaborate what that “sorting” entailed.

Council of Governors Chairman Peter Munya, speaking at the devolution conference said counties were working on contingency measures including issuing letters of dismissal to the striking doctors and recruitment “across the borders.”

He added that no one was intending to deregister the doctor’s union as both levels of government have no power to deregister a workers’ union.

“Our position is that as an employer, we have an option and must enjoy certain rights and especially the ordinary citizens,” he said.

The Meru governor also clarified that the 50 percent offer has not been withdrawn and doctors willing to resume work will enjoy the increase.

Share thisFacebookTwitterPinterestEmailWhatsAppThe Governor of Machakos County Dr Alfred Mutua. PHOTO | SALATON NJAU GOVERNOR MUTUA: I’LL IMPORT DOCTORS FROM UGANDA AND INDIA By NAIROBI NEWS REPORTER Machakos Governor Alfred Mutua has ordered striking doctors in his county to report to work on Thursday morning failure to which they will be sacked.Mutua added that he has