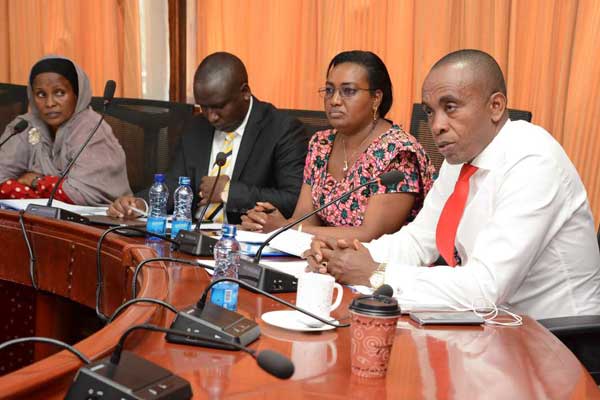 Members of select committee of both Senate and National Assembly on amendments of election laws speaking to journalist on October 12, 2017. The controversial amendment Bill has now become law after gazettement. PHOTO | JEFF ANGOTE | NATION MEDIA GROUP

The controversial Bill on election laws is now law.

The bill was published in a special issue of the Kenya Gazette that was published Thursday and has the date of assent indicated as October 28, two days after the repeat presidential election.

It states: “This Act may be cited as the Election Laws (Amendment) Act, 2017 and shall come into force upon publication in the Gazette.”

Among the significant provisions of the bill is a clause that would make it difficult for the Supreme Court to annul the election of the President based on minor inconsistencies.

It states that: “A Court shall not declare an election void for non-compliance with any written law relating to that election if it appears that (a) the election was conducted in accordance with the principles laid down in the Constitution and in that written law; and (b) the non-compliance did not substantially affect the result of the election.”

The Bill also sought to protect the result from being annulled on the basis of inconsistencies in the result forms as long as they are not meant to mislead.

It states: “A form prescribed by this Act or the regulations made thereunder shall not be void by reason of a deviation from the requirements of that form, as long as the deviation is not calculated to mislead.”

A majority of the rest of the amendments were already implemented by the Independent Electoral and Boundaries Commission via the regulations it published before the repeat election on Thursday last week.

They would however apply in future elections.

President Uhuru Kenyatta said on Monday that he had not signed the Bill on the basis that some people had argued that the new law amounted to changing the rules of the game midway and that it would give him an advantage over his competitors.

“And because law must be founded on reasoned national consensus, I listened to these voices. I did not sign the new Bill into Law,” he added.

The new law provides for the IEBC to announce the date of a new election once it is annulled, publish the names and political parties of the candidates to participate in the fresh poll and is specific that there would not be fresh nominations.

The new Act was published the same day a former MP challenged its constitutionality.