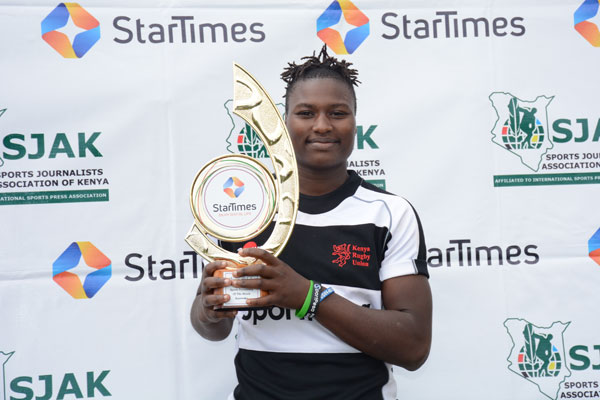 Kenya Lioness winger Janet Okello is the StarTimes Sports Personality of the Month for September.

Okello becomes the third recipient of the award, which was started in July, after her impressive performances during the Rugby Afrique Women’s Africa Cup Sevens in Tunisia in September, where the Kenya Lionesses qualified for the 2018 Commonwealth Games for the first time alongside South Africa – who also sealed a World Cup slot.

The 25-year-old was named the Most Valuable Player (MVP) at the competition and was also the second top try scorer with seven tries and provided a couple of assists. Kenya Lionesses lost 17-12 to South Africa in the final of the tournament.

In the semi-finals, Lionesses beat hosts Tunisia 26-7 to sail into final for the fourth year in a row. Okello was the star performer scoring two tries and providing an assist in the match.

Okello beat teammate Sinaida Aura, who was the top try scorer at the same event, Joycelline Jepkosgei, who broke the world 10km record at the Birell Prague Grand Prix posting 29:43 for victory as well as Berlin Marathon champion Eliud Kipchoge for the award.

“I am truly honoured to win this award, my first ever award on home soil. I am surprised to be the winner as I did not ever expect to be awarded. This is a good motivator as we prepare for the Commonwealth Games,” Okello said at the award ceremony on Thursday at the RFUEA grounds.

The winger walked away with a trophy, a 42-inch StarTimes digital TV set and Sh100,000.

Okello is the third recipient of the monthly award after deaflympian Simon Cherono and world 5,000m champion Hellen Obiri.

Lioness will take part in the Dubai Sevens on the first weekend of December as they gear up for the next April’s “Club” Games in Gold Coast.

“We reached the semi-finals in Dubai last year and the target this year is to go all the way to the final and lift the cup,” Lioness coach Kelvin Wambua said.