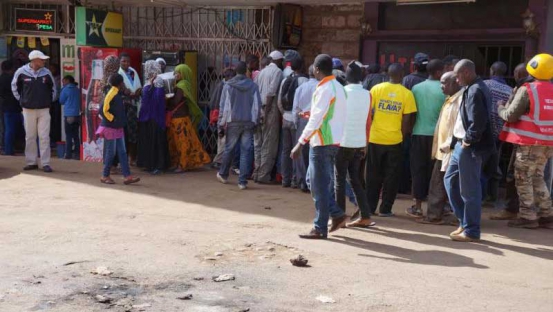 Four people were killed during a robbery incident at a night club in Limuru town, Kiambu County, on Friday night. Those killed included three robbers who were set ablaze by revellers and residents after the failed robbery attempt at U-Turn Club, and the club’s bouncer who was stabbed by the gang. The bouncer identified as Kevin Kimani succumbed to the stab wounds at Limuru Nursing Home, where he was rushed after the 1am incident. Doctors said the St Paul’s University student who worked as a part-time bouncer died of excessive bleeding. According to witnesses, a gang of seven boys armed with knives and iron bars raided the bar and robbed the revellers of their phones and money. However, Kimani came to the revellers’ rescue and managed to recover some of the phones that had been stolen But as he was escorting the gang out of the club, they overpowered him on the staircase and stabbed him several times.  Raised the alarm That is when Kimani and the revellers raised the alarm, attracting a group of boda boda operators and residents, who attacked the robbers and set three of them ablaze. Four escaped. By the time Limuru OCPD Eunice Githure and Tigoni OCS Isaiah Langat arrived, the suspects were already dead. The bar manager, George Maina, called on the police to speedily investigate the incident and ensure the suspects who escaped are apprehended and brought to book. A waiter said the incident happened within a very short time, adding that they came to know something was wrong when the bouncer called for help. “We did not even notice the criminals entering the club and robbing the patrons. It all happened quietly,” she said. Residents complained of increased insecurity in the area.
Source:: https://www.standardmedia.co.ke/