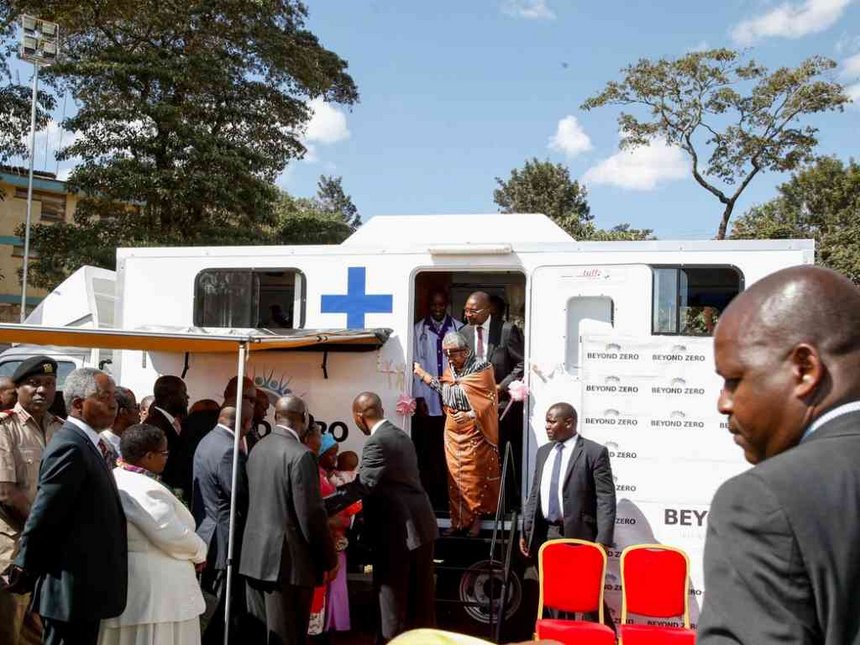 First Lady Margaret Kenyatta has thanked well-wishers who supported her campaign to improve maternal and child health in Kenya.

She also expressed her gratitude to Kenyans who joined her for marathons to raise funds for purchasing 47 mobile clinics to provide maternal and child health services in hard-to-reach areas in all counties.

She spoke when she presided over the official ceremony to hand over the 46th fully kitted mobile clinic to Muranga county on Wednesday.

The 47th clinic will be handed over to Nairobi county to mark the achievement of the First Lady’s target.

“I celebrate with Kenyans that the promise I made two years ago to equip all 47 counties with one mobile clinic each is [near fulfillment],” said Margaret.

She said the achievement of the target was made possible by the many well-wishers who rallied to support her initiative.

“My ultimate satisfaction will be to hear that more children will live to celebrate their 5th birthdays, that mother-to-child HIV transmission will be eliminated, and that no child, mother or father will die from preventable diseases,” she said.

The First Lady said the other healthcare issue that concerns her deeply is cancer. She said she will continue advocating for early screening.

“There is still significant work to be done in this area. My personal philosophy is that the unnecessary death of anyone is one death too many,” she said.

He said the county government invested resources in health care and to the fight against alcoholism.

Senator Kembi Gitura said the First Lady’s impact has been felt all across the country and that she is a unifying figure.

“You are a great model for anyone who aspires for a leadership position,” said Gitura.

The funds to buy the mobile clinic donated to Murang’a were give to the Beyond Zero campaign by the Jimnah Mbaru Foundation.

Mbaru said the Beyond Zero campaign attracted a lot of support because of the manner in which the First Lady worked closely with the private sector.

“We like your hard work.. We like your humility and we respect you. You are a role model, not only for Kenyans but also for the whole world,” he said.

First Lady thanks Kenyans, donors as Beyond Zero campaign hits target Reviewed by samrack on August 17, 2016 .