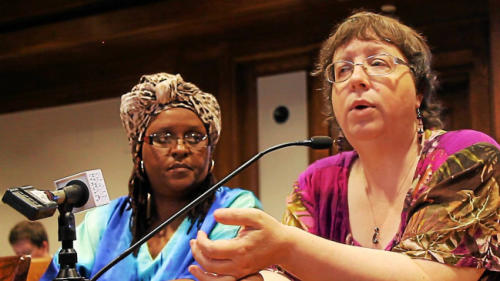 BOSTON >> Arguing that the current rate of foreclosures is worse than anything Massachusetts has seen since the run up to the American Revolution in 1763, activists and homeowners Tuesday pushed the Legislature to clarify the rights of municipalities to try to prevent foreclosures and minimize their damage.

Passage of a one-sentence bill (H 4553) filed late last month by Springfield Rep. Jose Tosado would give cities and towns the clear authority necessary to use their health and safety powers to implement programs like pre-foreclosure mediation without expanding the rights of municipalities, supporters said.

“Except where explicitly denied by the General Laws, municipalities shall have authority to enact laws for the purpose of ensuring the safety and security of residents by minimizing foreclosures and ensuring the upkeep of vacant properties and those in foreclosure,” the bill reads in its entirety.

Grace Ross, coordinator for the Massachusetts Alliance Against Predatory Lending, said the bill would allow cities like Worcester and Lynn to again run pre-foreclosure mediation programs that are on hold following a Supreme Judicial Court decision that questioned the cities’ authority to establish such programs.

Springfield in 2011 enacted two city ordinances related to homes left vacant by the wave of foreclosures that followed the 2008 economic collapse. Six banks that held mortgages on properties in Springfield challenged the legality of the ordinances and the case was decided by the SJC in December 2014.

In the decision written by Justice Francis Spina, the SJC concluded that “the foreclosure process is wholly a matter of State regulation absent an expression of a clear intent to allow local regulation.”

Close to 80 lawmakers wrote a letter to House Speaker Robert DeLeo late last month requesting that language be added to the municipal modernization bill, which was then in conference committee, to clarify municipalities’ rights.

“Municipalities have created foreclosure-preventative programs mutually beneficial to banks, homeowners and the community. Lynn’s Pre-Foreclosure Mediation program had a 97% success rate for mutually agreed upon affordable loan modifications while operating; Worcester protected ~800 foreclosed properties and kept them ‘up to code’ while in foreclosure,” the letter read. “The SJC decision put these and other programs on hold until we in the Legislature act.”

Rep. Denise Provost, who circulated the letter among her colleagues, told the committee Tuesday that she can stand on her front porch and see seven foreclosure-involved buildings in her Somerville neighborhood, some of which have fallen into disrepair during the foreclosure process.

“Pre-foreclosure mediation has shown … to be very successful and it makes a lot of sense to allow cities and towns to have this means for dealing with the foreclosed properties in their communities, rather than simply suffering from blight and coming to us for the authority to deal with blighted properties.”

Esther Ngollu, a Beverly resident, told the committee that she has been trying for a decade to get the bank to sit down with her and agree to a loan modification so she can keep her house.

“I got a predatory mortgage two years after I immigrated into this country and I’ve been fighting for my home for about 10 years,” she said. “I have tried to apply for modification for more than 10 times within a period of 10 years.”

Along with Provost, Reps. Timothy Toomey of Cambridge and Carmine Gentile of Sudbury also testified in favor of the bill. Tosado did not attend Tuesday’s hearing.

Gentile, a Democrat, said the programs that would be OK’d by the bill could be “a tool to reduce urban blight by minimizing vacant store fronts, allowing lenders and businesses to possibly resolve matters without foreclosure to both parties’ benefit and to the municipality and neighborhood’s benefit.”

The number of foreclosure petitions in Massachusetts increased 13.1 percent in June, marking 28 straight months of year-over-year increases in foreclosure starts, and that trend is expected to prevail through the end of the year, The Warren Group reported earlier in August.

Lenders filed 1,002 petitions to foreclose in June, up from the 886 petitions filed in June of last year. A petition is the first step in the foreclosure process and involves the lender filing a notice of intent to foreclose with the state’s Land Court.

Through June this year there were 6,616 petitions filed in Massachusetts — a 24.4 percent increase from last year’s 5,316 mark, according to The Warren Group.

June also marked the fifth straight month with more than 1,000 foreclosure starts, a streak that hasn’t happened since 2012, The Warren Group said.