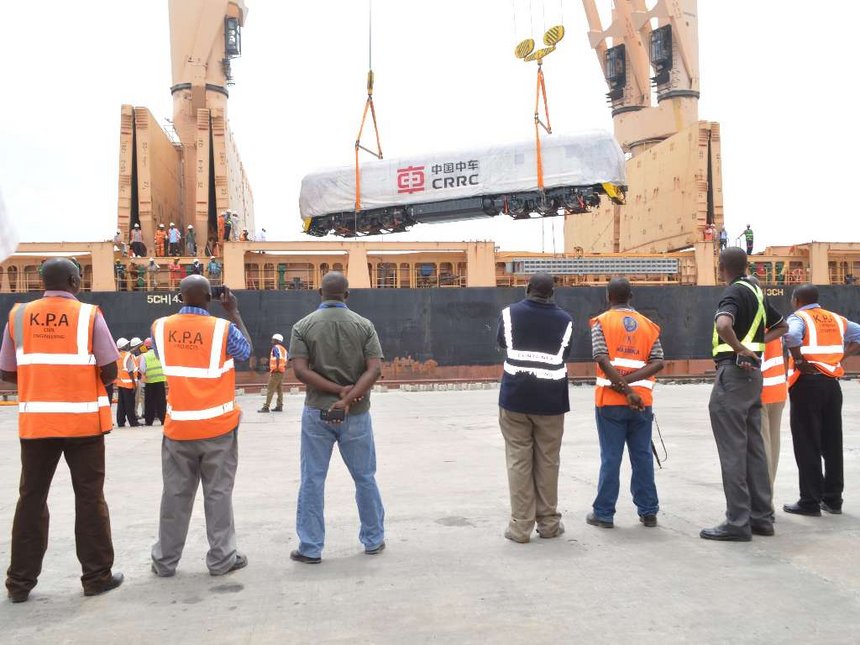 KPA and Kenya Railways officials witness the offloading of the first batch of SGR freight locomotives at the Port of Mombasa on Monday, January 9. /ELKANA JACOB

The first batch of locomotives that will ply the Standard Gauge Railway, whose construction is almost complete, arrived in the country on Monday.

The locomotives, sourced from China, was offloaded onto a rail track built at the berth and was still covered in white tarpaulin and will be unveiled by Transport CS James Macharia.

Kenya Railways managing director Atanas Maina said that the second batch of locomotives will arrive in the country next month.

“The production of passenger coaches is ongoing and are expected in the country next month or in March. We shall have four freight engines and two passenger locomotives,” he said.

He said that over 600 kilometres of the SGR rail track, which includes a marshaling yard and train station exchanges, had been completed.

Earlier, Maina said KR had procured a total of 56 locomotives, 40 passenger coaches and 1,620 wagons as part of the rolling stock.

“The new railway line constitutes the first phase of the SGR project that aims to connect Kenya, Uganda, Rwanda and South Sudan,” he said.

First batch of SGR locomotives arrive at Mombasa Port from China Reviewed by samrack on January 9, 2017 .