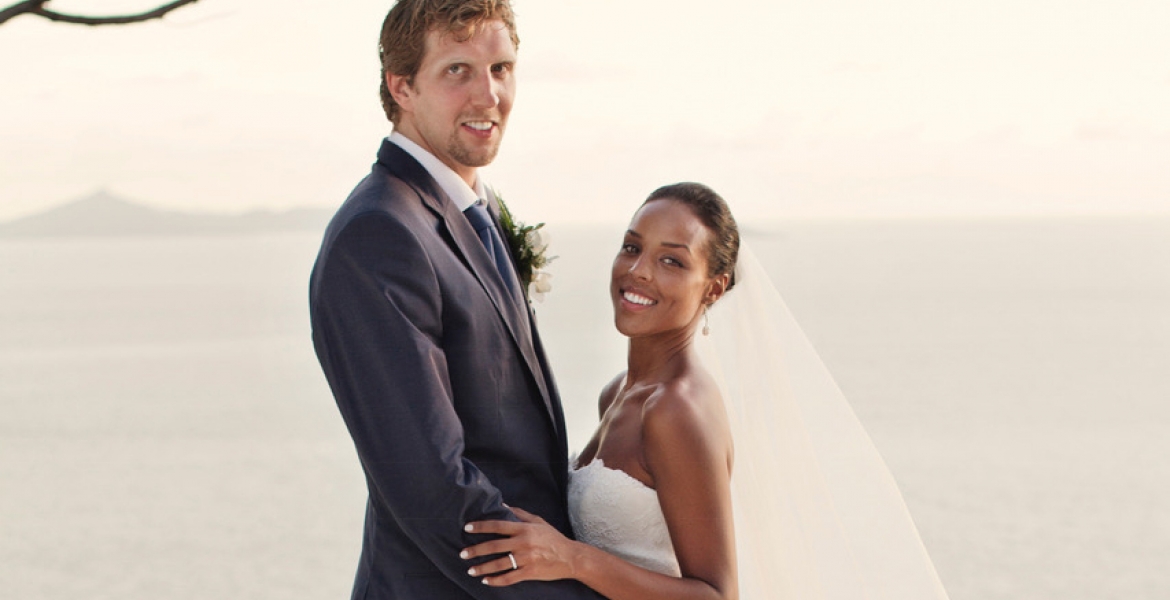 The five Kenyan women were covered from head to toe as they stood in front of an African garb-wearing Dirk Nowitzki.

One was the love of the Dallas Mavericks forward’s life and the reason they were in Nanyuki, Kenya. The others were decoys who if incorrectly chosen could cost the 13-time NBA All-Star a goat as punishment. The 7-foot German nailed tough shots in the NBA Finals and the Olympics, and on this occasion he did the same, correctly picking his bride Jessica Olsson.

“It was awesome,” Nowitzki told The Undefeated. “They took my wife away. They brought five or six girls out and they were all covered. So the first thing I had to do was find my wife. So I’m walking around and looking at how tall they are.

“I guess it’s one of the traditions. If you get it wrong, you got to pay the parents a goat or something. So I was lucky. I smelled her to find the right one. So, I got lucky there. But that was just an experience that I’ll never forget.”

Nowitzki is a worldwide known basketball name. He is the Mavs’ all-time leading scorer, the 2011 NBA Finals MVP, the 2007 NBA MVP and a two-time FIBA Europe Player of the Year. Basketball also introduced him to his wife.

The two met at a charity event for the Sports for Education and Economic Development (SEED) Project on a snowy night in February 2010. It was NBA All-Star weekend in Dallas. The Senegal-based nonprofit used basketball as a platform to engage youths in academic, athletic and leadership programs.

Nowitzki was tricked into raising his hand during an auction that resulted in him making a major donation in exchange for a Rolando Diaz painting. He also agreed to go on two dates for charity. But he was also hoping to get a real date with a beautiful woman he met that night named Jessica Olsson, who was working at a Dallas art gallery.

Olsson, the daughter of a Kenyan mother and Swedish father, was born in Nanyuki, Kenya, a market town located northwest of Mount Kenya that was founded by British settlers and is the home of the Kenya Air Force. She was raised in Sweden with her younger twin brothers, Marcus and Martin, who are both English Premier League soccer players.

Nowitzki hailed from Würzburg, Germany, a town of about 125,000 people that didn’t include many black or African residents. The racial differences never mattered to Nowitzki, as he quickly became smitten with “Jess” after they met.

“What made her so special? What made me fall in love with her? First of all, she’s got to be attractive. That’s obviously part of it,” Nowitzki said with a big smile. “And I think we just clicked intellectually. She likes art, she likes sports. Her brothers both played soccer, they were professional.

Although race wasn’t a big deal to Nowitzki and Olsson, it became a topic when their relationship started became public.

Nowitzki and Olsson made their first big public appearance on July 13, 2011, when they were on the red carpet at The ESPYS awards together. They received a lot of comments on Twitter when he kissed her after winning an award during the televised show. The Twitter chatter was not necessarily negative, but it was race-related.

WNBA star Candace Parker used the line “jungle fever” on Twitter and wrote “love it” after they smooched.

AtlantaBlackStar.com wrote, “Jessica quickly became a hot topic on Twitter for several reasons including shock and praise that she was on the arm of Dirk Nowitzki.” ThePostGame.com had a story with the headline: “Dirk Nowitzki’s Kiss Heard Round Twitter.”

“Honestly, this is the first I am seeing a lot of these tweets,” said Nowitzki, when shown the list of tweets that night at the 2011 ESPYS. “That was a crazy time for me with the championship and The ESPYS and I’m glad I got to spend it with Jessica.”

Nowitzki said he has never heard any racial comments in regards to him and his wife.

“Nobody actually approached me with it,” Nowitzki said. “Everybody that’s met my wife has said she’s great with me. So I haven’t heard any of that to my face. I’m sure there’s some people that think of it to themselves. But, I’ve never heard it to my face.”

So how did Nowitzki refrain from color ever being an issue to him?

“Growing up in Germany, and basketball,” he said. “We’ve always grown up around all sorts of races. I played with the national team where half of my teammates were from Yugoslavia. Color or race for me never really mattered, and that’s also the beauty of sports.

“You’re a team. Same with marriage. You’re a team, and pulling on the same string. You try to make it work and chemistry has got to be there. That is just the way I was raised.”

Nowitzki and Olsson were married in July 2012 with traditional wedding ceremonies in Germany and Kenya. In Kenya, they had a Kikuyu wedding where the community learns that the daughter is engaged and relatives from both sides get to intermingle before it concludes with a “ruracio” (dowry payment) discussion. The bride wore a traditional Kikuyu garment while the groom was in a dark brown traditional outfit with orange hues.

The traditional Kenyan wedding in her hometown of Nanyuki was a new experience for both the bride and groom.

“She didn’t really grow up in Kenya,” Nowitzki said. “Her dad’s Swedish and her mom is from Kenya. They have lived in Sweden basically her entire life. So this is new to both of us.”

Olsson asked that Nowitzki keep an open mind to the Kenyan wedding. To no surprise, the free-spirited, comical and fun-loving German relaxed, danced to African music and even had an encounter with a helpless goat.

“Her mom threw a wedding party and that’s where some of those photos came from where I had the outfit on with a hat on,” Nowitzki, who loves Kenyan stews and barbecue, said. “It was a special experience. I’ve never, obviously, been a part of anything like that, the dances, the whole experience, the tradition of a wedding down there.

“It’s different. You have to cut a goat. Lots of symbols, all the different things. They really threw us a really traditional Kenyan wedding.”

Payment of a dowry is an old African tradition used to demonstrate the groom’s ability to provide for his bride. In the past, Kikuyu weddings included a dowry payment by the grooms of cows, goats, honey, green bananas and/or traditional brews. Modern-day weddings include cash dowry.

So what did Nowitzki — a multimillionaire certainly financially capable of providing for his wife — pay in dowry?

“We kind of faked things,” Nowitzki said. “They gave me a littlewedding Kenyan shillings and I paid them that. It was literally like a whole-day event. There were hundreds and hundreds of people there.”

The Nowitzki family has quickly grown, as they now have three children, a girl and two younger boys. They all went back to Kenya last summer. The plan is for the Nowitzki children to spend time in Kenya and Germany yearly to learn their heritage. Olsson’s mother has died since the wedding, but there are still a lot of family members in Kenya whom the Nowitzkis want their kids to know.

“This past summer we stayed like two weeks,” Nowitzki said. “She’s got uncles, cousins. Her grandmother’s still alive. She’s almost a hundred. It’s a special place for our family. We want our kids to meet some of their cousins, so we try to go down there every summer. Maybe we’ll get a house down there …

“We don’t want them to just grow up [in Dallas]. We were gone for three months this past summer. We want to show them different cultures, different languages so they can grow up, become educated and make educated decisions when they’re older on where they want to live, what they want to do.”

The Nowitzki family’s next trip to Africa might include Nowitzki playing in a basketball game.

The NBA and the National Basketball Players’ Association hosted the first NBA game in Johannesburg on Aug. 1, 2015. Nowitzki wanted to play, but didn’t because he was previously committed to attend a friend’s wedding as best man. Several sources expect another NBA exhibition game to take place in Africa this summer. If so, Nowitzki would like to play in it.

“I’m trying to pull it off. I heard it was a great event to go to,” Nowitzki said.

Nowitzki is now 38 years old and in the twilight of his projected Hall of Fame career. Upon his NBA retirement, the Nowitzkis are expected to reside primarily in Dallas. Olsson has been living in Dallas for about a dozen years and has lots of friends and some family there, too. But Nowitzki knows that there will be some challenges that his children, most notably his boys, could face being black in America.

Nowitzki described what he saw in 2016 as “not pretty” in terms of racial and social justice. He believes that education, respect and discipline are key to keeping his children out of harm’s way.

“In your head you’re saying it’s 2016, this stuff shouldn’t be happening in our society,” Nowitzki said. “That’s a little scary to every parent. You’re just trying to educate your kids so eventually if they do find themselves in a situation, they can talk themselves out of it or make the right decisions, make the right reads …

“You react to authority when somebody speaks to you, like teachers, parents or whoever. You have to educate them early enough so they know, this is a person, the higher authority, you need to show them some respect.”

Nowitzki recalls his father playing “no games” with him as a child and having a belt hanging over a lamp if needed for discipline. Nowitzki said he instills discipline and respect with his kids, but also love.

“What I’m trying to do now with my kids is raise them with love,” Nowitzki said. “So they got to show you authority, got to show some respect. Not anything goes. That’s not how it works around here.

“So you try to find a nice little mix where they feel the love. But also, they feel a tough hand every now and then.”

NBA Star Dirk Nowitzki Opens Up on His Interracial Marriage (He’s Married to a Kenyan) Reviewed by samrack on January 10, 2017 .

Share thisFacebookTwitterPinterestEmailWhatsAppNBA Star Dirk Nowitzki Opens Up on His Interracial Marriage (He’s Married to a Kenyan) The five Kenyan women were covered from head to toe as they stood in front of an African garb-wearing Dirk Nowitzki. One was the love of the Dallas Mavericks forward’s life and the reason they were in Nanyuki, Kenya.