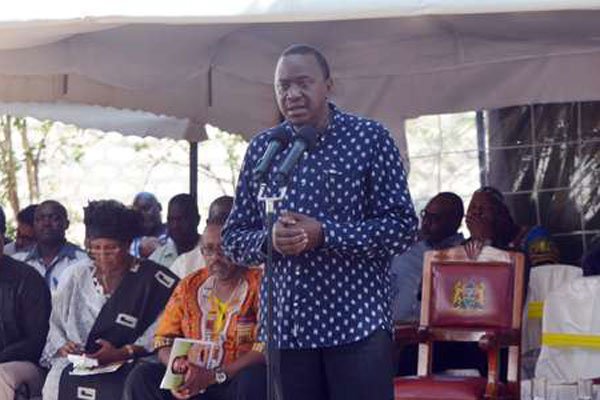 President Uhuru Kenyatta has Monday evening assented to the controversial amendments to the electoral laws that allows manual back-up mechanism during the General Elections.

The move fans a bitter row because the Opposition did not support the changes that were passed by both Houses.

The amendments, among other things, seek to allow the Independent Electoral and Boundaries Commission (IEBC) to have a “complementary mechanism” in case of failure of the electronic system of voter identification and results transmission.

But the Raila Odinga-led Opposition has termed the amendments as a bid to “resurrect dead voters to vote” and what they said was Jubilee’s attempt to rig the elections.

However, in their defence, the Jubilee team has defended the amendments saying it was foolhardy to depend on a fully electronic system that they said is prone to failure and breaches, including hacking.

The Opposition had threatened to go to the streets if the laws are signed.

They argued that the joint select parliamentary committee – which crafted the laws – should be the one to look at the document and in case of changes, recommend the best way forward.

The 14-member bi-partisan committee was co-chaired by Senators Kiraitu Murungi (Meru) and his Siaya counterpart James Orengo after deadly five-week street protests demanding the removal of the nine IEBC commissioners.

The Murungi-Orengo team negotiated the exit of the Issack Hassan and his commissioners and proposed a new seven-member team whose new office holders will be vetted by Parliament on January 17.

But the Jubilee team argued that the committee had ceased to exist after it tabled its report.

“The amendment has passed and Cord leader Raila Odinga should know that we must have elections next year,” National Assembly Majority Leader Aden Duale told journalists after the amendment was passed.

“Let Raila Odinga know that his threats won’t work because we have no law in Kenya saying that there can be no elections unless Raila is on the ballot.”

In the House, Opposition MPs walked out as their Jubilee colleagues passed the amendments with no debate in two Special Sittings that were characterised by claims of pepper spraying, fist fights and members carrying guns to the chamber.

The Senate, though the sober House that sat and discussed the laws with decorum, also narrowed down to party lines during voting, with Cord losing 24 to 19.

Share thisFacebookTwitterPinterestEmailWhatsAppUhuru approves changes to elections laws President Uhuru Kenyatta has Monday evening assented to the controversial amendments to the electoral laws that allows manual back-up mechanism during the General Elections. The move fans a bitter row because the Opposition did not support the changes that were passed by both Houses. The amendments, among other