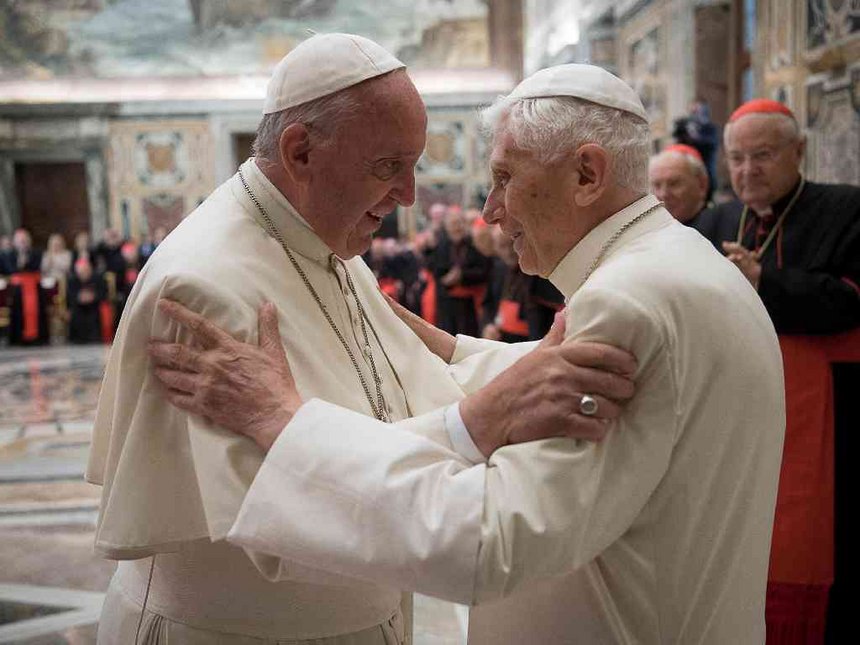 Former pope Benedict (R) is greeted by Pope Francis during a ceremony to mark his 65th anniversary of ordination to the priesthood at the Vatican June 28, 2016. /REUTERS

Former pope Benedict made one of his rare public appearances on Tuesday to be feted by his successor Pope Francis.

Two days earlier, Francis had denied reports that Benedict was still exercising influence in the Vatican.

Benedict, an 89-year-old German, stood without a cane for part of a ceremony in a Vatican hall to mark the 65th anniversary of his ordination to the priesthood.

But in his first public comments in the presence of his successor, he did appear to have difficulty pronouncing a few words as he thanked Francis and a small group of cardinals in Italian.

In 2013, Benedict, citing health reasons, became the first pope to resign in some 600 years.

He ended a papacy of nearly eight years marked by a scandal centred around leaked documents that alleged corruption and mismanagement in the Vatican.

Benedict has since been living in relative isolation in a convent in the Vatican gardens and has made only a handful of brief public appearances.

They are usually at major Church ceremonies together with Francis such as the investiture of new cardinals.

Reporters asked Francis on Sunday about reports that Benedict was a sort of parallel pope, still exercising influence.

“There is only one pope,” he said aboard his plane while returning from a visit to Armenia. He praised Benedict for “protecting me, having my back, with his prayers”.

Francis has compared Benedict’s presence in the Vatican to having a “wise old grandfather” at home.

He said he had heard that when some Church officials had gone to Benedict to complain that he was too liberal, Benedict “sent them packing”.