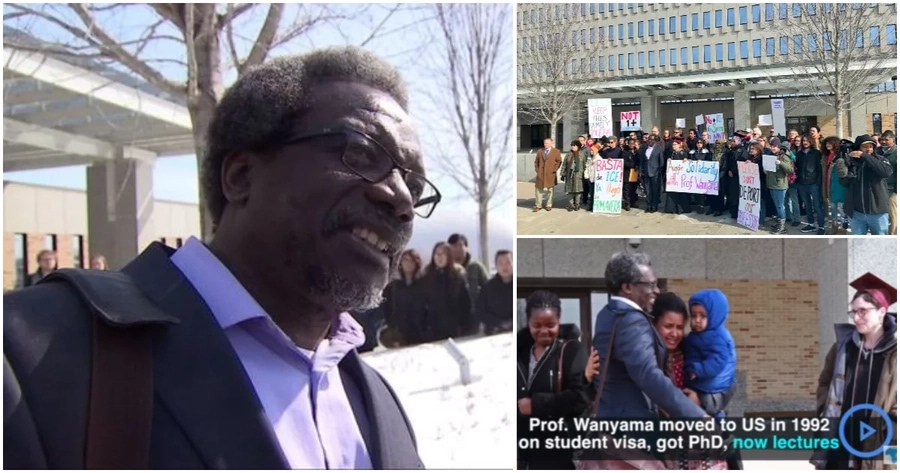 Professor Aggrey Mzenga Wanyama moved to the United States in 1992 on a student visa. Photo:TUKO

Aggrey Mzenga Wanyama has lived in the United States for 25 years – His continued stay will however not be possible with Trump’s new Immigration policy – Wanyama was an English professor at Augsburg University and also worked as a nurse – He has three kids and students who love him and are protesting against his deportation – But Immigration authorities insist he must leave the country or face forceful deportation A relative of Devolution Cabinet Secretary (CS) Eugene Wamalwa is now staring at forceful deportation from the United States if he will not leave the country in 90 days. TUKO.co.ke has reliably learned Aggrey Mzenga Wanyama, an English professor at Augsburg University in Minnesota, was on Thursday, April 5, ordered to pack and go after his appeal to seek political asylum flopped.

According to CBS TV and other news outlets in the United States, the Kenyan-born professor was on Thursday afternoon informed by the Immigration and Customs Enforcement authorities that he had three months to collect his stuff and exit the country. Wanyama, who moved to the United States on a student visa in 1992 and acquired a PhD and became a lecturer, is believed to be one of the victims of President Donald Trump’s tough and controversial Immigration policy.

Wanyama’s earlier appeal for political asylum was rejected. He had been asked by the immigration authorities to report back for a review of his case and to arrange for departure back to Kenya. With his appeal having been dismissed by court, Wanyama is now left with no other choice but to abandon his job and come back to his motherland.

Meanwhile, students and teachers at Augsburg University and other members of the immigrants’ community in the United States have been protesting Wanyama’s looming deportation. “This is about the whole immigrant community and not just about being Kenyan. We are talking about a man who has contributed very widely in this society. He is a professor. He mentored me. He’ is a father figure to many of us,” Renson Anjere, a fellow Kenyan living in US, told CBS TV.

The beloved professor also enjoys high profile support including from Minneapolis Mayor Jacob Frey who is against the deportation and has been in the forefront fighting for Wanyama to stay and continue with his good work. “He is not just a resident, and he is not just a community member, he is a member of our family and the City of Minneapolis. He not going anywhere,” Frey told CBS TV. Ironically, Wanyama’s deportation comes at a time when Kenyan government is also on the spot for allegedly deporting its own citizen, Miguna Miguna.