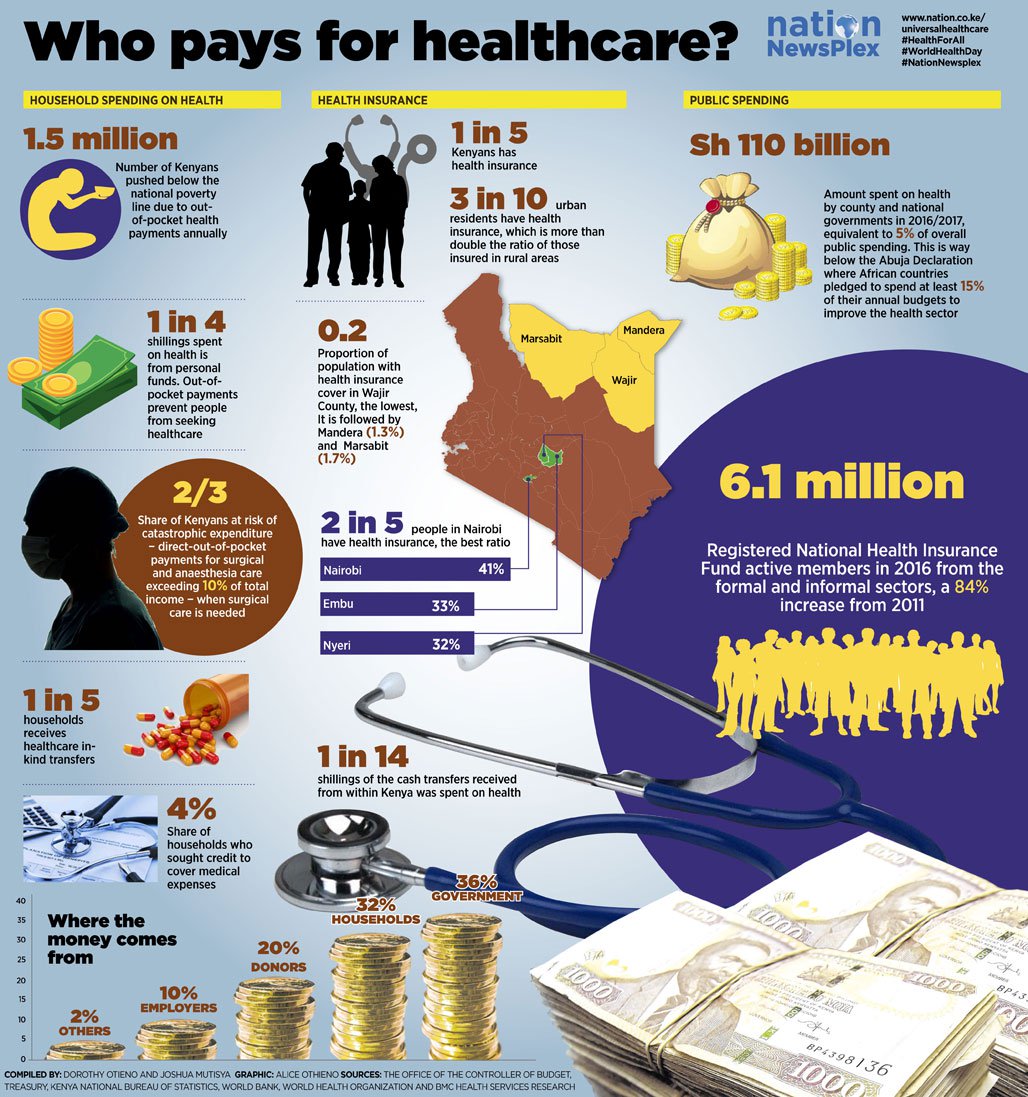 About 1.5 million Kenyans are pushed below the national poverty line due to medical bills annually

The financial burden of paying directly for health services is one of the big hurdles standing in the way of Kenya achieving universal healthcare. The other two major contributing factors are low allocation to health in the national Budget and lack of access to quality treatment.

As we mark the World Health Day today, the story of health services in Kenya is far from rosy. For instance, only one in five Kenyans enjoys some form of medical cover, according to data from the Kenya Integrated Household Budget Survey (KIHBS) 2015/2016. With a population of about 45.4 million that means more than 36 million Kenyans are unable to enjoy quality healthcare.

Additionally, families have to pay directly for medication and treatment, accounting for a quarter of total spending on health. Experts say payment of medical bills from personal funds prevents people from seeking care and also leads to impoverishment.

Every year, about 1.5 million Kenyans are pushed below the poverty line because they pay their medical bills from their own pockets, according to a recent peer-reviewed study by two Kenyan health economists, Mr Thomas Maina and Dr Jane Chuma. The Nation Newsplex review of health data finds that one of the top 10 reasons families seek credit is to cover medical expenses.

Figures from the World Health Organisation (WHO) paint a grim picture of the health burden on Kenyans. Two-thirds of Kenyans are at risk of catastrophic expenditure when surgical care is required, according to the UN agency. A catastrophic spending is direct out-of- pocket payments for surgical and anaesthesia care exceeding 10 per cent of total income.

Beyond the money issues, evidence that the health system is far from offering quality care can be found in the fact that the top diseases killing Kenyans, making them sick and taking them to hospital are preventable by simple measures such as proper sanitation, providing safe drinking water and good nutrition. Many of these ailments can also be treated through prompt diagnosis and with low cost drugs.

More than half (55 per cent) of total illnesses are attributed to diseases of the respiratory system and malaria. The two are also the biggest reason adults and children visit hospitals. Diarrhoea and skin diseases — including wounds — are third and fourth respectively. Pneumonia completes the list of top five causes of hospital visits.

KIHBS figures show 29 per cent of urbanites have health insurance compared to 13 per cent of rural residents. Nairobi County has 41 per cent of its population insured.

An earlier Newsplex review found that Kenyans made more than 60 million visits to hospitals and health centres in 2015. Of these, 44 million were made by people aged five years and above while another 15.5 million were by children under five. Children under five made seven million outpatient hospital visits because of respiratory diseases other than tuberculosis and pneumonia. Confirmed malaria accounted for 1.8 million (11 per cent) of outpatient visits, followed by diarrhoea at 1.6 million (10 per cent), and skin diseases including wounds at 1.1 million visits (seven per cent). Others were suspected malaria (five per cent) and pneumonia (four per cent).

For people aged five years and over, respiratory diseases other than tuberculosis and pneumonia accounted for 11.2 million visits or a quarter of all outpatient visits.

Location determines access to the various health services. For instance, the proportion of urban residents who are insured is more than double that of people living in rural areas. KIHBS figures show 29 per cent of urbanites have health insurance compared to 13 per cent of rural residents. Nairobi County has 41 per cent of its population insured, the highest in the country. It is followed by Embu (33 per cent), Nyeri (32 per cent), Kirinyaga (29 per cent) and Kajiado (28 per cent). Twenty nine counties have coverage rates below the national average of 19 per cent. Wajir County has the lowest at 0.2 per cent of the population covered. It is followed by Mandera (1.3 per cent), Marsabit (1.7 per cent), Garissa (2.7 per cent) and West Pokot (2.9 per cent).

Mr Mungai Njoroge knows all too well how ruinous sudden medical expenses can be in the absence of insurance. The 56-year-old who lives in Marmanet village, Laikipia County, was diagnosed with an infection that affected his bladder and he ended up spending much of his wealth on treatment.

“I sold all my cows and crops to pay medical bills at a private hospital,” he said. Having run out of money and property to sell, he sought treatment at the county referral hospital in Nyahururu.

“By then I was totally broke, I had nothing,” he told Newsplex.

It is such heart-breaking stories from constituents that convinced Laikipia Governor Ndiritu Muriithi to prioritise quality healthcare. Early this year, Laikipia, through a memorandum with NHIF, targeted 110,000 households for membership recruitment through a house-to-house sensitisation campaign. By the end of February, half the households had joined the fund, says Dr Donald Migoi, the County Executive for Health. About 33,000 of them were assessed to be vulnerable and the county is looking for ways to rope them into the scheme. NHIF also accredited 44 of the 77 health facilities in the county, including the Level Four hospitals at Nyahururu and Nanyuki, all sub-county hospitals and dispensaries, where wananchi can get medical services once they present their membership cards.

The governor said an initial setback was the lack of awareness about the scheme by both communities and health workers.

Makueni County, which hosted a two-day conference on universal healthcare this week, has been carrying out a similar recruitment drive.

The three tenets of universal health coverage are pooled funds that come from government sources, compulsory contributions (like the ones NHIF members in the formal sector and their employers pay) and voluntary health insurance. The funds are used to address features of universal health coverage including the share of people and costs covered as well as the range of services available.

Policy makers have to balance between the three dimensions while maximising the magnitude to which people’s needs are met without impoverishing them. Universal healthcare ensures everyone gets quality health services where and when they need them without suffering financial hardships.
Apart from insurance, the other aspect of health financing is government spending in the sector. An earlier examination of county and national governments budgets by Newsplex found that Kenya is way off from meeting the pledge it made more than 15 years ago to spend 15 per cent of its Budget on health. Health constituted eight per cent of the combined national and county budget allocations in the 2016/17 fiscal year.

When it comes to the actual spending, the analysis, based on the Controller of Budget’s reports, found that the total public expenditure on health was five per cent of the overall spending by the two levels of government in 2016/17 or about Sh110 billion, a drop from six and seven per cent in the two previous years. The spending shortfall was worse partly due to the challenges county governments are facing in implementing their budgets.

Kenya is one of the countries yet to implement a universal health coverage. In many countries without comprehensive coverage, unforeseen medical expenses are the top reason for people going into poverty. According to WHO ranking of the world’s health systems, Kenya ranks 140 out of 191 countries while

France tops the global list. France’s health system is that of universal healthcare largely financed by the national health insurance.

In Kenya, getting to the hospital is not easy either with about half of Kenyans having to travel at least five kilometres to reach a health centre. The ideal situation is that everyone should live within a 5-km radius of a health institution. But even when one manages to get to a hospital, the quality of care in public facilities and low tier private hospitals remains wanting. Since the start of this year, the media has highlighted numerous cases of botched treatment in top public hospitals. For much of the last two years doctors and nurses have been on strike, forcing hospitals to send patients away unattended.

With the public health service rendering poor services, private players are streaming into the market to provide alternatives. However, global studies have proven that a healthcare system that relies too heavily on private healthcare is not only too expensive but ends up producing poor outcomes.

Grim figures paint a hollow picture of Kenya’s healthcare About 1.5 million Kenyans are pushed below the national poverty line due to medical bills annually The financial burden of paying directly for health services is one of the big hurdles standing in the way of Kenya achieving universal healthcare. The other two major contributing factors