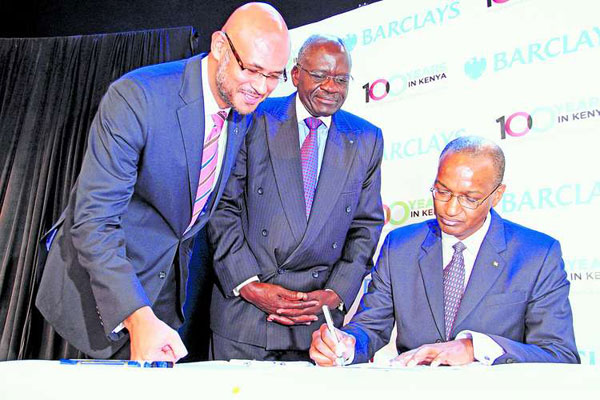 Barclays Plc is on Tuesday set to announce exit from the Africa market marking an end to the lender’s 100 years in Kenya.

According to the Financial Times, Barclays’ chief executive Jes Staley is planning to make the announcement during the bank’s investors briefing.

It is said that the bank wants to put more focus on its core market in United Kingdom and United States.

The bank’s board of directors met last week and decided that in principle it was better for the bank to exit Africa.

FT, quoting people familiar with the matter, say the board has constituted a board sub-committee to draw an exit strategy, meaning the announcement of the how will be delayed.

Barclays Kenya would not comment on record, but sources told NTV that Barclays Bank of Kenya does not expect its operations to be affected.

“We don’t comment on market speculation, but would like to add for further context that Barclays Africa Group Limited is the holding company for Barclays Bank Kenya. When Barclays Africa Group was formed in 2013 we created one of the biggest banking groups on the continent. We are a well-capitalised and independently funded business and control the African operations,” says BBK’s chief Jeremy Awori.

ONE BANK FOR AFRICA

A sale decision means that the multinational will be selling a 62.3 per cent shareholding in the Barclays Africa Group which is listed at the Johannesburg Stock Exchange, currently valued at Sh497 billion.

The balance of the shareholding is held by ABSA Group Limited. Barclays Africa Group was set up in 2012 by combining the South Africa business with the rest of Africa business previously operated separately.

At the time, the lender said the move was triggered by a need to execute a “one bank for Africa” strategy.

The Africa business is made of subsidiaries in 12 countries with a total of 1,267 branches employing 45,000 employees. Last month the lender announced a plan to scale back in investment bank operation in Brazil, Asia, Europe and Russia sending home over 1,200 staff.

Those in the know say that the exit decision is informed by various factors, the biggest being the wobbling South Africa economy — where the Africa unit is listed and holds much of the assets.

The board also cited graft and misconduct as extra risks in its continued existence in Kenya and Africa where Barclays owns part of the equity but shoulders the entire risk ‘when something goes wrong.’

Uncertainty in what the government can deem to be activities meant to finance terrorism may have also had a play in the decision.

In 2013, Barclays announced a plan to stop money transfer service with one of the main operators in Somalia as the bank was not sure where the money was ending up and the implication this would have on its global licence.

“There are a number of serious concerns about the operation [of money transfer operators], with the sector at particular risk of being used for the transmission of the proceeds of crime, for money laundering, and for terrorist financing. This risk is exacerbated by a lack of transparency on who the remitters and end-receivers are in transactions,” the then Barclays chief executive Mr Jenkins, told Oxfam in an interview.

This come at time when another multinational, HSBC had been fined over Sh184 billion by the US government on accusation of laundering drug money in Mexico.

But there is also the issue of a weak Barclays’ balance sheet, with the proceeds of the Africa business said to be

“One of the benefit of selling out of Africa is that it could address worries about Barclays’ capital. Analysts at Jefferies estimate that a sale could add as much as 0.8 percentage points on Barclay’s’ core capital ratio- taking it much close to its 12 per cent target,” FT says.

The move comes hardly months after Barclays Bank of Kenya launched its centennial celebrations where it outlined its agenda to boost youth, small and medium enterprises, innovation and the gender activities.

In its 100 years in Kenya, Barclays credits itself in playing a significant role in the development of  financial and economic landscapes, influencing the policy development  and investing in  transformative initiatives that have impacted on local communities.

“Although we are a global brand, we pride ourselves in having a truly Kenyan soul. Indeed, our legacy is greatly intertwined with Kenya’s rich heritage and by the same token, our future is interwoven with Kenya’s future. We take the view that ours is a ‘shared growth’: when Kenya prospers, we prosper,” said  Mr Awori during the launch of the year-long celebrations, adding that he had “no doubt that Barclays’ commitment to Kenya is real and we are therefore here to stay!”.

End of an era as Barclays plans to leave Africa after 100 years Reviewed by samrack on March 1, 2016 .