President Kagame speaks on democracy at the Harvard Institute of Politics | Boston, 26 February 2016 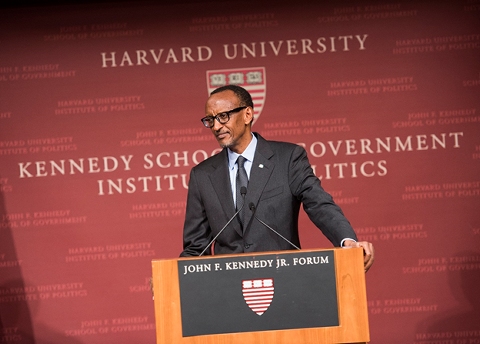 President Kagame speaks on democracy at the Harvard Institute of Politics | Boston, 26 February 2016

I am pleased to be back at Harvard and I thank the Institute of Politics for the invitation to speak with you this evening. I am also happy to see a number of familiar faces in the audience tonight. Thank you for coming.

When I addressed this Forum fifteen years ago, Rwanda meant, quite simply, “genocide”. Our country had managed to survive against all odds. Justice and reconciliation were still a work in progress. But already our policy focus was shifting to the challenge of achieving real prosperity for Rwandans within a generation. I can only imagine how improbable that ambition must have sounded at the time.

Today Rwanda is a country transformed. We live with our past, but it does not define us or hold us back. Rwanda is a top performer, not only in Africa, but globally, on various objective measures of growth, business climate, health, education, crime, anti-corruption, women’s empowerment, trust in public institutions, not to mention perceptions of personal well-being and freedom.

Students had the chance to ask questions

We are not yet where we want to be, but neither do we take anything for granted.

Ending global poverty is the foremost challenge of our time. While the world has seen astounding progress, some countries have barely advanced.  There is no simple explanation for the uneven distribution of gains. The question of economic development remains in many respects a complex mystery. But the answer matters. Millions of lives hang in the balance. If effective approaches can be adapted to other contexts, everyone would benefit. It is in this wider context that Rwanda often comes up for debate, particularly with the chicken-and-egg argument about development versus democracy.

Which comes first? Does one impede the other? Why can’t it be both?

Since the world’s most advanced economies also tend to be among its most stable democracies, the logic of this question has never been obvious.

Let’s state this in stark terms for the sake of argument.

Unrecognisable versions of Rwanda are deployed by both development-first and democracy-first camps to score points. In the process truth is swallowed by polemics.

Given where we have come from, to be scrutinised because of success is a good problem to have. But Rwanda is not a thought experiment, it is a real nation.

Most importantly, the claim that development comes at the expense of democracy does not hold up to serious scrutiny in any society that is composed of human beings. Prosperity is not achieved without empowering citizens and unleashing their creativity.

Development is not a question of more funding and better policy. What is much more important is for those to be connected to the norms, values, and mindsets that guide the choices made by individuals each and every day.

Seemingly simple choices, such as keeping newborn babies warm, or building financial security by saving, can have a huge impact. Shared norms, such as intolerance of corruption and discrimination, are the foundation of good citizenship.

In Rwanda, public affairs are conducted with the expectation that the views of citizens will be heard and their complaints acted upon.

Accordingly, leaders are better off serving with humility, through consultation and consensus. Things are done in the open, and indeed the best data on shortcomings in our country are regularly produced and published by our own public institutions.

Good results are impossible to explain without factoring in the trust that exists between citizens and leaders as a result of our governance choices. As democratic space becomes more inclusive, the preferences and viewpoints of elites and experts have to accommodate other perspectives. This challenge can be quite unsettling even in the most advanced democracies, as we continue to see, judging by current events.

Yet this is what we have chosen to do in our country. People must have, in the formulation of Amartya Sen, the “freedom to lead the kind of lives that they have reason to value”.

We have good reason to value the choices we make because they respond directly to our past experiences and our aspirations for the future.

Rwandans expect important national matters to be handled with care and determination. They would certainly question the legitimacy of outcomes decided by others without their participation.

Our constitutional order is both distinctively Rwandan and squarely within the mainstream of democratic practice. It works for us, and there is ample evidence for that. But it will also endure, because the means of renewal and adaptation are provided for. The recent referendum is a useful example.

First, what was on citizens’ minds was brought out clearly in the course of wide public conversation taking place over years. Rwandans, most of whom are under thirty, are more concerned with reaching our potential, than sliding back into a dark past.

Rwandans wanted what they wanted, and it was striking to see it clearly expressed, with wisdom and nuance. Continuity of leadership was found to be as important, given our context, as the principle of term limits, which was maintained.

When the time comes, and it will be sooner rather than later, Rwandans will choose a person who has repeatedly proven herself, or perhaps even himself, directly to them.

No one can deny that the referendum reflected anything less than the preference of a broad majority of Rwandans.

The reaction to it has been instructive however.

First, we see again that in Africa, one size must always fit all. Every country is urged to be a role model for every other, as if bad governance is a kind of African virus.

Second, there is a new democratic fundamentalism that values form, over substance.

If it is inherently undemocratic to amend constitutions, why do they contain provisions for doing so, everywhere?

President Kagame speaks on democracy at the Harvard Institute of Politics | Boston, 26 February 2016 Reviewed by samrack on March 1, 2016 .