Drama as armed policemen serve Wanjigi with summons in traffic 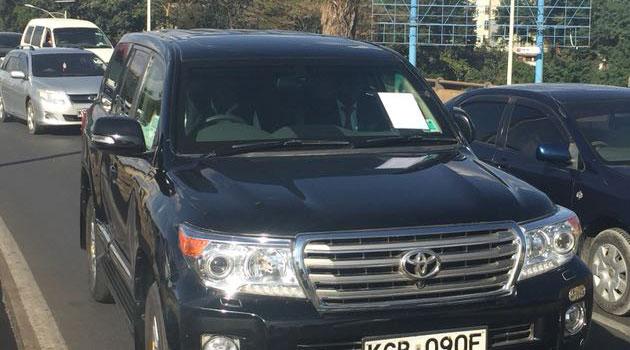 Drama as armed policemen serve Wanjigi with summons in traffic

The officers in four vehicles blocked Wanjigi’s car and ordered him out but he declined to open the car, causing drama on Prof Wangari Maathai Road formerly known as Forest Road.

The officers eventually pasted the summons on the windscreen of his car.

A copy of the document seen by Capital FM News indicates that he’s required to appear before the Nyeri Chief Magistrate’s Court Thursday morning to face an unspecified criminal case.

Addressing journalists at the scene, Wanjigi insisted that he was being persecuted for his firm political standing against the government.

“We already have an anticipatory bail of any kind. Today, they have chased me all over town to serve me the summons?” he wondered.

“The other day it was my passport. Another day is an obituary. As I said, this is becoming comical. It is a persecution.”

He has previously complained that he was being harassed by the state for failing to tow the line due to his association with Opposition leader Raila Odinga.

Last week, he was barred from travelling to Zimbabwe for the burial of former Prime Minister Morgan Tsvangirai, but was eventually allowed to travel a day later after the court’s intervention.

“Normally, I would have been called, written a statement and know what it is about. I am being asked to take a plea on an investigation I know about,” he asserted.

He noted that “Nobody has called me. Nobody has bothered to try to inform me about anything to do with this criminal charge. I have no idea what this is for.”

– How the drama started –

Wanjigi was coming from a lunch meeting at a hotel in Westlands.

On his way home, a vehicle, tried to stop them while hooting but they declined to stop.

The driver sped off towards his home but in the process, “we decided, it is better we come to a public space because this deal didn’t seem to be too genuine. I am someone with an anticipatory bail in two courts. Why do you have to come for me in this manner?”

They drove up to Museum Hill where the policemen managed to block the traffic.

“They came brandishing guns, banging the doors and windows of the car but after they saw a small crowd, they decided to show us some piece of paper (the summons) saying I am supposed to appear in court on the 1st of March, which is tomorrow morning at 8am,” he said.

“I am being asked to take a plea of an investigation I know nothing about.”

The drama lasted for three days, although police did not manage to arrest him.

They only left his residence after NASA leader Raila Odinga went there and even spent a night.

“Despite raiding my home with more than a hundred men, they have never called me to record a statement of what they did in my house, never,” a visibly angered Wanjigi said.

On February 7, the Daily Nation carried a ‘death and funeral’ announcement bearing the photo of a tycoon causing uproar.

Drama as armed policemen serve Wanjigi with summons in traffic Reviewed by samrack on February 28, 2018 .

The officers eventually pasted the summons on the windscreen of his car/COURTESY Drama as armed policemen serve Wanjigi with summons in traffic There was drama on Nairobi’s Museum Hill area on Wednesday afternoon when heavily armed police officers surrounded businessman Jimi Wanjigi’s car to serve him with court summons. The officers in four vehicles blocked