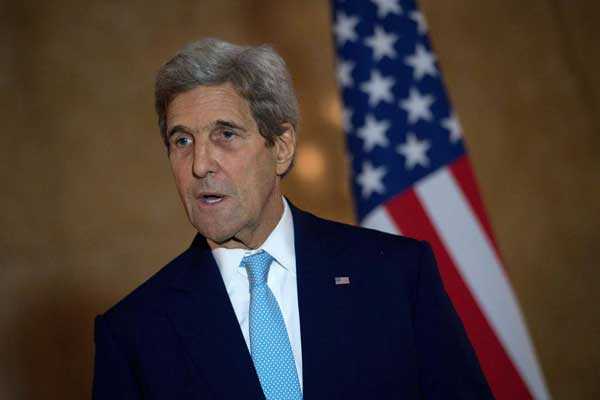 Former US Secretary of State John Kerry, who is the co-leader of the Carter Centre’s election monitoring team in Kenya. He has paid tribute to slain IEBC IT Manager Chris Msando. AFP PHOTO | POOL | JUSTIN TALLIS

Former US Secretary of State John Kerry, who is the co-leader of the Carter Centre’s election monitoring team in Kenya, has paid tribute to slain IEBC official Christopher Msando.

“Security for the elections and all election administrators throughout the electoral process is paramount for the conduct of credible and democratic elections. We hope that his death will not have a chilling effect on voters and electoral authorities,” Mr Kerry added.

The Carter Centre has condemned attacks on IEBC.

“Attacks on the IEBC and other independent institutions, whether verbal or physical, remain an unacceptable form of public discourse,” the Centre said in a statement.

“The Centre further implores politicians to refrain from politicising this event,” the statement added in regard to Mr Msando’s murder.

The monitoring group founded by former US President Jimmy Carter also called for “an independent and comprehensive investigation” into the death of the IEBC’s ICT manager.

The Independent Electoral and Boundaries Commission should proceed with a scheduled nationwide test on Wednesday of the vote-transmission system known as Kiems, the Centre suggested.

“The success of Kiems remains an essential step toward increasing stakeholder confidence in the election,” the Carter Centre said.

In a pre-election report issued last week, the US election monitoring group generally praised the IEBC’s performance, while also pointing to commissioners’ “inadequate communication with stakeholders and insufficient transparency regarding their decision-making.”

In its statement on Tuesday, the Carter Centre said its technical experts had “enjoyed a productive relationship with Mr Msando and are personally saddened by the loss.”

Mr Kerry and monitoring group co-leader Aminata Touré, a former prime minister of Senegal, are due to arrive in Kenya this week to oversee a delegation of 80 vote monitors.