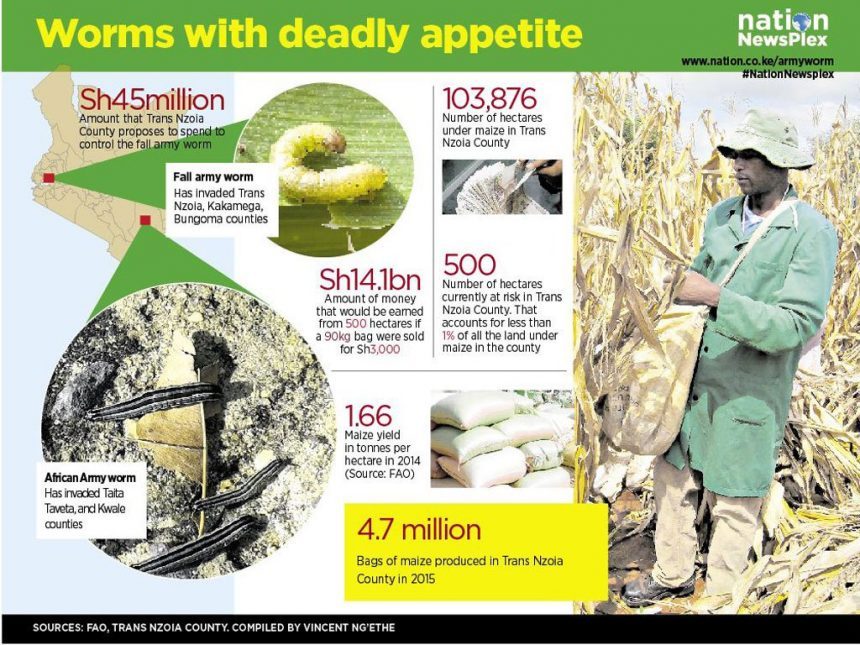 In western Kenya, the fall army worm, which is native to North and South America and has caused damage in Southern Africa, has invaded Trans Nzoia, Kakamega and Bungoma counties, where much of Kenya’s maize is grown.

At the Coast, the African army worm has invaded Taita-Taveta and Kwale counties.

Trans Nzoia announced that 500 hectares of its maize were affected as of two weeks ago and announced a Sh45 million kitty to control the pest. Reports by the Kenya Broadcasting Corporation indicate that the funding was directed at Kiminini and Endebess sub-counties.

All the sub-counties in Trans Nzoia, including Kwanza, Saboti and Kachibora, produce maize.

“The funds will enable us to acquire the right pesticides in controlling the pests which have been spotted in farms in Endebess and Kiminini sub-counties,” said Governor Patrick Khaemba when he spoke in Kitale.

Mr Khaemba also said the funds will be committed to field extension services where farmers will be sensitised on how to identify the pest, if their crops are infested, for quicker action.

“We are however calling on the national government to supplement our services. This must start by declaring this infestation a national disaster and providing enough funds for aerial spraying,” he added.

Kenya Seed Company managing director Azariah Soi, said the vicious pest, which is tolerant to most pesticides, risks wiping out plantations in the affected region if measures are not taken quickly to combat it.

“It is difficult to control the pest which is the larvae stage of a Fall armyworm moth. No single pesticide can neutralise the pest once it is at the larval stage,” said Mr Soi.

“ Unlike the African armyworm, the fall army worm, which is dispersed by wind, burrows inside maize stems and cobs making it difficult to detect and can lay up to six generations of up to 50 eggs in one location leading to rapid destruction,,” he said at the company’s headquarters in Kitale.

Nation Newsplex reached out to experts from Egerton University. Using the pesticide Dudutrin, it would cost Sh1,500 to spray an acre of maize, and Sh3,707 to spray one hectare of maize by hand, with labour costs included.

At market rates the Sh45 million allocated by the county government would take care of 12,100 hectares, which is about 12 per cent of the 103,876 hectares under maize in Trans Nzoia , according to the county’s integrated development plan.

At the coast, a team of experts has been dispatched to the affected areas of Njukini and Challa within the agriculturally rich Kasigau-Maktau belt in Taita-Taveta.

“They have to be killed before they can lay eggs because if that stage reaches, it will be more difficult to deal with them,” said Taita-Taveta Governor John Mruttu in an interview with Newsplex in his Wundanyi office.

He fears that if the insects spread to national parks, vegetation would be cleared and that could drive wild animals to the local farms posing another threat.

The pests invaded farms in Lunga Lunga, Kwale, in early March and were said to have spread to Shimba Hills, the food basket.

Kwale County agriculture director David Wanjala said his department was making efforts to control the spread of the worms with funds having been allocated money to buy more chemicals.

In Kisumu, agricultural experts have issued an alert to farmers in the county following the invasion. Armyworms were spotted at Maseno Agricultural Training Centre’s farm.

County Executive for Agriculture Henry Obade said the dangerous pests should be dealt with before it is too late. This comes as the national government says it is on high alert of the pest’s spread after its attack on bordering countries of Uganda and Tanzania.

The American armyworm is the most devastating pest that has destroyed maize plantations in most parts of Africa. To control this, he called on farmers to identify the plant infested and alert the nearest agricultural office to access the extent of damage and recommend the chemicals to use.

“I call on all farmers to alert the nearest agricultural office immediately in case they observe armyworms.

He continues: “When spotted you should not let even a day pass, it is just a matter of time and they will multiply and the damage could be disastrous to the county’s food security.

He said that the pest can lay more than 50 eggs in an area resulting in the destruction of crops. As a precautionary measure, he asked farmers to use the Karate insecticide to spray their fields late in the evening so that they drench the soils to help contain their spread.

“These pests commonly referred to as Fall army worms have developed resistant to some of the insecticides that are used. So we ask farmers to clear them immediately they are spotted,” he said.

He urged other neighbouring counties to keep in check to prevent invasion. “Farmers to practice crop hygiene and field sanitation where they uproot, dispose the crops affected separately or by burning to avoid recurrence of pests and diseases. In addition, because planting same crops on the same piece of land encourages build up of pests and diseases, farmers have been advised to embrace crop rotation, at least after 2-3 years,” he added.