Nation Media Group to implement a paywall on Business Daily website in order to increase revenue, 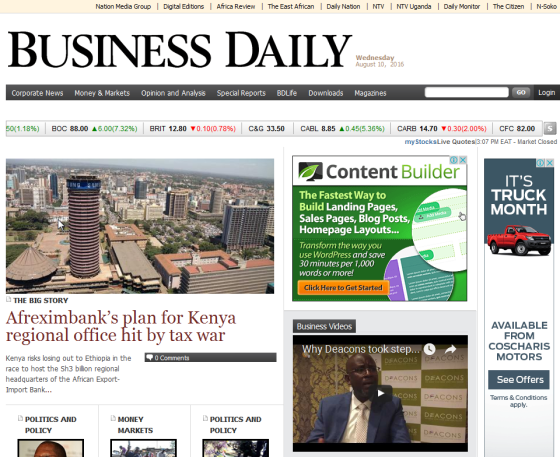 Nation Media Group on Wednesday reported its Full Year 2016 results posting a decline of 24 per cent in profit after tax to Sh 1.635 Billion from the previous year’s Sh 2.22 Billion.

Total Revenue also fell by 8 per cent to Sh to 11.3 Billion, mainly attributed to a drop in advertising volumes, closure costs on the non-performing businesses and staff reorganization.

NMG CEO Joe Muganda said “It’s tough in as far as advertising is concerned; and the reason is simple: The economy isn’t doing well.”

NTV revenue grew by 7 per cent,  Business Daily Revenue went up slight by 1 per cent, while revenues from the company’s mother product Daily Nation fell by 6 per cent.

Nation Media Group has also announced plans to implement a paywall on Business Daily website in order to increase revenue, which has been diminishing due to a decline in paid print readership and advertising revenue.

Paywall is whereby a reader is required to pay subscription before accessing any or part of an online content.

For the fourth year in  row, the company retained a dividend of Sh 10.per share. NMG will hold its Annual General Meeting on Friday 23rd June as from 2.00 PM, KICC – Nairobi.

A few Tweets from the Briefing;

#NMGInvestorBriefing Business Daily Relaunch resulted in growth of copy sales by 20%. NMG about to implement a paywall on BD – a first

Nation Media Group to implement a paywall on Business Daily website in order to increase revenue, Reviewed by samrack on April 7, 2017 .