CUE to decide on regulation to have PhD-only lecturers 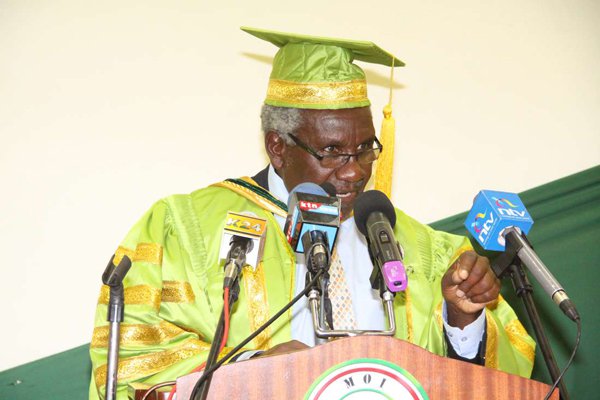 Prof Chacha Nyaigoti Chacha, Commission on University Education’s chairman, in a past photo. The commission will on January 22, 2018 make a major decision on whether to do away with or retain requirements demanding that only PhD holders teach in universities as lecturers. PHOTO | FILE | NATION MEDIA GROUP

CUE to decide on regulation to have PhD-only lecturers

The higher education regulator will on Monday make a major decision on whether to do away with or retain requirements demanding that only PhD holders teach in universities.

The requirements were to come into effect by the end of this year.

Commission for University Education (CUE) Chairman Chacha Nyaigoti Chacha said universities would be guided according after the meeting.

There have been growing concerns over the small pool of professors in the country putting to question the implementation of the guidelines.

“We need to pronounce ourselves on how we will achieve it. Institutions had been given some guidance on people who are supposed to teach and in terms of timeline on when to be achieved. The commission is discussing modalities of its implementation and therefore people should not panic,” said Prof Chacha.

Lecturers with master’s degrees were reduced to tutorial or junior research fellows, commonly referred to as teaching assistants.

The statement comes in a wake of a task force report which warned that universities offering law programmes may suspended the courses due to lack of lecturers with doctorate degrees.

Under new guidelines and standards by CUE, by the end of this year, all those teaching in universities should possess doctorate degrees or should show evidence of enrolment into the programmes.

However, a report by a task force on legal sector reforms chaired by prominent lawyer Fred Ojiambo warns that if the Council of Legal Education, which regulates legal education in the country, were to insist that universities abide strictly by the set faculty standards, very few universities would qualify.

“In effect, such a move would be deleterious, since it would roll back the gains made in increasing access to legal education.

“It was further observed that in the council’s experience thus far, institutional capacity to produce PhDs in Law was non-existent, making it difficult to insist on the requirement that lecturers in the LL.B programme must be PhD holders,” adds the report that was discussed in Mombasa on Thursday during a conference on legal education.

Last year, the commission stopped the award of doctorate degrees to students who directly conduct research and are taught through seminars, saying such a system produced weak graduates.

CUE data show that more than half of the 10,350 lecturers do not have PhDs and that 4,394 students or one per cent of the total population of learners are enrolled for doctoral degrees.

University of Nairobi boasts of 402 doctorate degrees and has the highest number of professors in the country – 164 full professors and 238 associate professors.

The university has been producing the highest number of doctorates yearly.

Mr Ojiambo’s report notes that the proliferation of universities offering undergraduate law degree programmes has not been matched by a corresponding increase in qualified faculty members teaching at universities.

“Currently, most law schools lack professors of law and have to settle for persons with master’s qualifications to deliver their programmes. Regrettably, in some campuses, there are some lecturers who do not even hold the minimum qualifications required in order to teach law.

“In some cases, even where the faculty is possessed of requisite qualifications and expertise, such staff are deployed in irrelevant disciplines rendering the expertise ineffectual,” adds the report.

The taskforce is also against CUE taking over the accreditation of law programmes in universities.

It points out that the Universities (Amendment) Act 2016, which was signed by President Uhuru Kenyatta last year, effectively curtails the central role of Council of Legal Education as a professional body in regulating standards and quality assurance in the education and sectoral professional practice in Kenya.

The Act allows CUE to engage professional bodies and associations to carry out inspection of universities on its behalf.

However, pursuant to a Court Order, the Universities (Amendment) Act, 2016 has been stayed.

“Under this amendment, CLE would stand unable to license and supervise legal education programmes,” warns the report, adding that the implementation of this new law would have far-reaching implications on the role of the CL.

The report says it would greatly curtail current efforts by the CLE in enforcing quality standards under the current law and regulations.

“The task force deliberated on the new legislation and found that the legislation will have dire consequences on legal education. The legislation is not in conformance with international best practice in the regulation, licensing and oversight of the professions, including the legal profession worldwide,” it added.

“The legislation will have foreseeable negative consequences not only to the quality of legal and professional services provided in this country, it will also irretrievably water down the levels of oversight over legal education providers currently exercised by CLE in addition to also making it impossible for CLE to operate as a regulator and licensing authority over legal education programmes in Kenya.”

The task force was set up by the Attorney General in September 2016 to look at the training of legal professionals in the country and its report was deliberated at the Conference on Legal Education that ended last week in Mombasa.

It recommends a two-tier accreditation structure in which –  CUE would be the overall authority for accrediting and establishing universities at a general level consistent with section 5 of the Universities Act, 2012, as existed prior to the amendment introduced by the Universities (Miscellaneous Amendment) Act, 2016.

At the same time, CLE would retain the responsibility for programme (professional) accreditation of law programmes in Kenya consistent with section 8 of the Legal Education Act, 2012.

In order to improve the quality of university faculty, the taskforce recommends that CLE should conduct a feasibility study to inquire into the capacity of currently licensed legal education providers to cater for the national legal education and training needs in Kenya.

“The study should also inquire into the interface between legal training and practice to inter alia explore best practice with a view to tapping the capacity of experienced legal practitioners who are non-academics,” says the report.

It adds that the council should develop a strategic initiative to encourage legal education providers to build capacity of university faculty to teach law and the plan should specify and provide measurable timelines.

It also recommends that the council should regularly organise colloquiums for university lecturers and involve key stakeholders such as the Judiciary, Law Society of Kenya, and Office of the Attorney General and others on themes related to legal education and training in Kenya.

“Legal education providers must take initiative and responsibility for legal education and training at all levels with emphasis on post-graduate legal training, capacity building with a view to increasing number of academic staff with requisite post-graduate qualifications,” it adds.

Others are: University of Nairobi’s Mombasa campus licence is valid until January 19, 2021, Kabarak University’s expires on September 8, 2020, Egerton University (February 12, 2021) and Strathmore University (November 9, 2021), subject to satisfaction of certain terms and conditions.

Moi University is now allowed to teach law for the second year running.

CUE to decide on regulation to have PhD-only lecturers Reviewed by samrack on January 22, 2018 .

Prof Chacha Nyaigoti Chacha, Commission on University Education’s chairman, in a past photo. The commission will on January 22, 2018 make a major decision on whether to do away with or retain requirements demanding that only PhD holders teach in universities as lecturers. PHOTO | FILE | NATION MEDIA GROUP  CUE to decide on regulation to have PhD-only