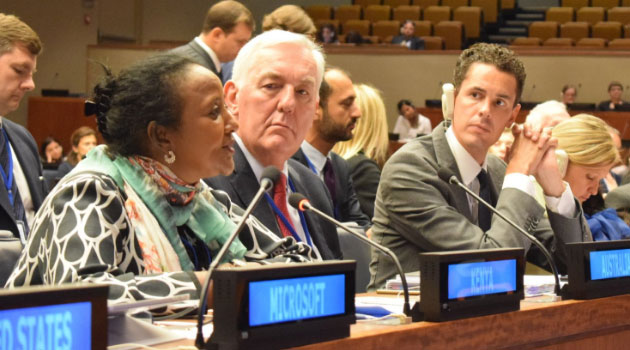 The CS said the war on trafficking is undermined by inadequate funding, lack of data on victims of trafficking, low awareness by the public on human trafficking, and family dynamics in aiding trafficking of persons. Photo/MFA.

The Cabinet Secretary regretted that despite national and international commitments, forced labour, modern slavery & human trafficking have continued well into the 21stcentury.

“We are optimistic that the review will open a new chapter in the war on these barbaric practices that should have no place in the 21st Century,” the CS added.

Amb. Amina Mohamed was speaking Tuesday during a Call to Action to end forced labour, modern slavery and human trafficking, hosted by UK Prime Minister Ms Theresa May, on the sidelines of the 72nd United Nations General Assembly in New York.

“We need an integrated global platform to increase public awareness and share good practices on how to eliminate human trafficking and smuggling at the national, regional and global levels,” said the CS.

Amb. Amina Mohamed called for concerted efforts in addressing the socio-economic and political drivers of human trafficking as well as loop-holes that aid slavery and trafficking.

“We must work together to address loop-holes that aid slavery and trafficking including ensuring effective border management, relevant capacity building for immigration and other relevant officials and efficient monitoring of local and international employment agencies,” said the Cabinet Secretary.

“Sadly, Kenyans are trafficked to various countries for the purposes of domestic labour and commercial sex exploitation,” said the CS.

“This Act domesticated the United Nations Convention against Transnational Organised Crime, including its protocol to prevent, suppress and punish trafficking in persons, especially women and children,” said the Cabinet Secretary.

Despite these efforts, the CS said the war on trafficking is undermined by inadequate funding, lack of data on victims of trafficking, low awareness by the public on human trafficking, and family dynamics in aiding trafficking of persons.

“Working together to address these challenges will go a long way in mitigating and eventually eradicating this challenge,” said the CS.