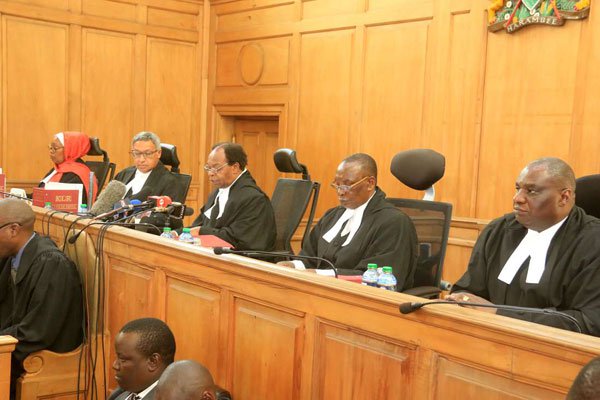 The National Super Alliance on Thursday said it respected the Court of Appeal’s decision to allow the printing of presidential ballots by a Dubai-based company to proceed.

The political group’s spokesman Salim Lone said his party will continue to monitor the operations of the Independent Electoral and Boundaries Commission to ensure a free and fair election.

The court overturned a High Court decision blocking the printing of the papers by Al Ghurair Printing and Publishing company. The lower court had said the tender had been awarded without public participation.

The decision will ease fears over the possible cancellation of elections and clear the way for political parties to focus on campaigns and for IEBC to spend more of its time satisfying parties regarding its preparedness to over see the polls.

The printing of ballots, huge business for printers and brokers, has been controversial this time around, with a series of court cases and complaints at the public procurement appeals board.

Political parties too, including Nasa, had rejected the choice of Al Ghurair Printing and Publishing, which they sensationally claimed, but with little in the way of evidence, it had relations with the First Family.

While the risk of tampering with the election is a serious concern and the IEBC has at times appeared stuck on Al Ghurair Printing and Publishing, it has not been demonstrated that even with all the safeguards, printing at the company is any riskier than other presses.

On Thursday, the IEBC’s lawyers said they were chasing the ruling to study it and give the company the go-ahead to start printing.

The High Court had decided that, by going through direct procurement, the electoral agency had not invited public participation in the tender, as required by the Constitution. It had ordered the commission to come up with a mechanism for public consultations.

The Court of Appeal said a direct tender is provided for in the law and does not require public participation since the public interest is protected by the regulations governing that kind of procurement.

The five-judge bench agreed that although public participation was mandatory and all public bodies must comply with it in the tendering process, the requirement does not apply in cases of direct procurement.

“Public participation was not mandatory when IEBC opted for direct procurement, which is also provided for in law,” the judges said.

Public bodies opting for direct procurement must, however, comply with the requirements set out in law and regulations.

They said the law governing direct procurement has taken care of the requirement of transparency and fairness and that no evidence had been produced to show that the IEBC had not complied.

The five judges, however, said all public bodies going for open tendering must adhere to the requirements on public participation which have been enumerated in the Constitution, and the Public Procurement and Asset Disposal Act.

Nasa’s lawyers expressed dissatisfaction with the ruling but the party said it will respect the court verdict and promised to keep an eye on how the IEBC carries out the remaining stages of activities to the election date.

“We of course respect the new ruling, but we will continue to be vigilant on this critical matter of ensuring a free, fair, credible and peaceful election. But we are distressed that despite all the doubts about the integrity of Al Ghurair, IEBC insisted on re-awarding it the tender again and again – and again,” Mr Odinga’s adviser Salim Lone said in a statement.

Lawyer Paul Mwangi, for Nasa, said the judgment was contradictory because they had reached two different positions.

“On one hand, they said that time constraints is not a factor to be considered in determining whether a party has complied with the law, and in another part of their finding they say that the High Court should have taken into account that IEBC did not have enough time to retender,” he said.

“We welcome the court ruling on presidential ballot papers and we urge Nasa flag bearer to stop discrediting independent institutions ahead of the elections,” he said at the party’s headquarters in Nairobi.

Presidential candidate Ekuru Aukot of Thirdway Alliance Kenya supported the ruling even as he challenged the IEBC to allow all presidential agents to supervise the printing of the ballots and the eventual destruction of templates and any extra printing material, after the printing has been completed.

“This will be in line with the High Court ruling and directive that the tallying of results at the constituency level will and shall be final,” he said.

The United Democratic Party’s Cyrus Jirongo also agreed with the judgement, arguing it had eliminated the possibility of chaos during the election.

During the hearing at Milimani Law Courts in Nairobi, the IEBC, through lawyer Kamau Karori, sought to justify why it did not consult all the presidential candidates prior to signing the ballot printing contract with Al Ghurair Printing and Publishing.

Mr Karori said the commission consulted representatives from Jubilee and Nasa on May 24, this year because at the time, these were the ruling and opposition parties respectively.

Presidential candidates were cleared between May 28 and 29.

Lawyer Paul Muite, also for the electoral agency, had said public participation can be through elected leaders and there can not be a greater public participation than that conducted by the electoral agency when it consulted leaders from Jubilee and Nasa, which have several affiliate parties representing approximately 90 per cent of the Kenyan public.

Lawyer Muite said there was transparency which traces back to discussions and debate in Parliament before direct procurement of election material from Al Ghurair Printing and Publishing was approved.

Lawyer James Orengo for Nasa had, however, said the Constitution provides that public participation is mandatory and the IEBC should not be allowed to run away from it.

Court of Appeal ruling clears the way for August election Reviewed by samrack on July 20, 2017 .