n one day, NASA lost a case to IEBC and UhuRuto had a field day accusing Raila of losing focus on his goals – Raila initially accused Matiangi and working with IEBC’s Wafula Chebukati to rig the poll in favour of Jubilee – NASA had also wanted the election postponed by hours or a day after accusing IEBC of flouting election regulations but lost the case at the High Court – Now, several Jubilee leaders claim NASA is now planning to hack the IEBC electronic systems so that they can have a reason to have the election postponed On Wednesday, July 19, President Uhuru and his deputy, William Ruto, were forced to come out guns blazing after National Super Alliance presidential candidate Raila Odinga claimed Acting Interior Cabinet Secretary Fred Matiangi was holding secret meetings to rig the August poll in favour of Jubilee. He based this on the claims that Matiangi has been secretly meeting with Independent Election and Boundaries Commission boss Wafula Chebukati. 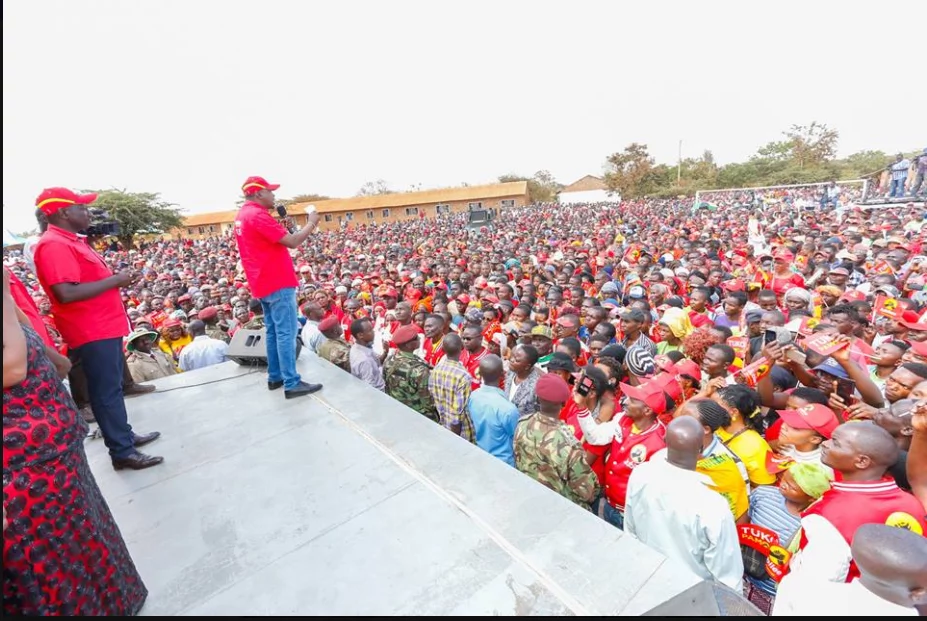 While at a rally in Voi on Wednesday, July 19, UhuRuto reminded Raila that the competition is with them, not with Matiangi. Photo: Facebook, Uhuru Kenyatta

UhuRuto held that it was within Matiangi’s rights to meet with Chebukati to plan the security of Kenyans and that their party had enough people to engage on politics on their behalf.

On the very same day, NASA suffered a blow when IEBC won a court case against the opposition alliance which wanted the election postponed so that the poll body can install a back up system to their electronic voter identification and relaying of results system. IEBC claimed they already had the systems in place, something the three judge bench agreed with in the end, stating that the commission had set standards for devices before the procurement process.

Yet again on the very same day, a number of Jubilee politicians held a press conference at their party headquarters where they sensationally claimed that NASA is now planning on hacking the IEBC. The politicians included Kikuyu Member of Parliament Kimani Ichungwa and Senators Beatrice Elachi (nominated) and Aaron Cheruiyot (Kericho).

We demand NASA stops using the Judiciary to block Kenyans from voting. They are only using the courts as a cover for their plans to hack the IEBC’s electronic voter system, leading to its failure and therefore have a justifiable reason to have the August 8 election cancelled,” said the leaders as quoted in the Daily Nation on Thursday, July 20. According to the report seen by TUKO.co.ke, the politicians claimed that NASA’s numerous court cases filed by NASA and their proxies are undermining Kenyans’ democratic right to vote.

I cancelled my wedding to travel abroad: Why Kenyan students studying overseas are coming back