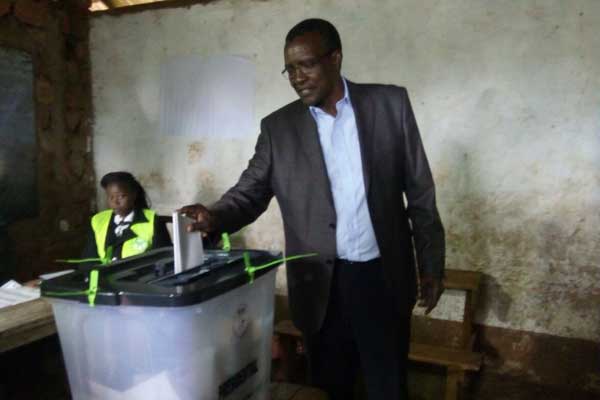 Chief Justice David Maraga travelled to his rural home in Nyamira County where he cast his vote in the repeat presidential election.

Mr Maraga, accompanied by his wife arrived at Bosose polling centre in West Mugirango constituency where he cast his vote at 1.55pm.

The CJ chatted briefly with Nyamira County Woman Rep Jerusha Momanyi before he cast his vote.

“I have finished my mission and I can now leave,” he said.

He declined to answer questions from journalists.

“I am not ready to answer any question,” he said.

On September 1, the Supreme Court nullified the re-election of President Uhuru Kenyatta and ordered fresh poll be conducted in 60 days.

The CJ agreed together with Deputy Chief Justice Philomena Mwilu, Smokin Wanjala and Isaac Lenaola that the electoral body messed up transmission of poll results.