Uhuru Kenyatta: I may reach out to Raila Odinga after poll 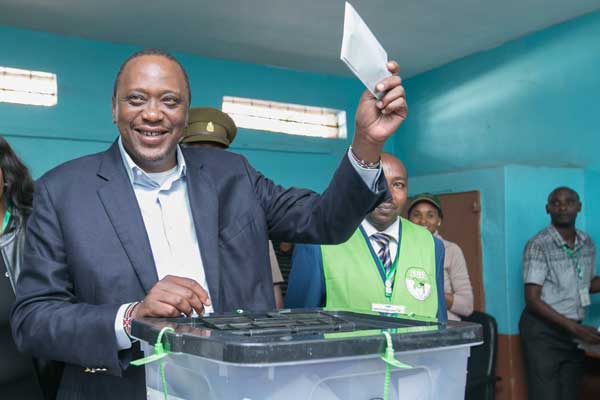 Uhuru Kenyatta: I may reach out to Raila Odinga after poll

President Kenyatta and his deputy William Ruto have cast their ballots in the repeat presidential election.

Mr Ruto cast his ballot at Kosachei Primary School polling station in Turbo constituency a few minutes after 10am.

The president, who is celebrating his birthday Thursday, said, as a responsible leader, he may reach out to National Super Alliance (Nasa) Raila Odinga after the election as a way of unifying the country.

He acknowledged the country is grappling with tribalism, even as he reiterated that participating in an election or not is an individual’s right which must be respected.

“As a responsible leader you must reach out and that is my intention,” Mr Kenyatta said of the initiative which he said would happen after the elections are done.

The Head of State, who was accompanied by First Lady Margaret Kenyatta and his mother Mama Ngina Kenyatta expressed hope that the outcome of this election will bring to an end the political acrimony that has been witness in the country in the last few months.

“It’s my hope and wish that the country will move forward after this election,” he said.

Mr Ruto expressed confidence of a high voter turnout as he cast his vote in Uasin Gishu County on Thursday.

He defended the move to hold the elections today despite the withdrawal of Mr Odinga, their key challenger saying everyone had a constitutional right to vote or abstain.

He said Jubilee Party deserved another chance to lead the country.

“It is everyone right to vote or not. We are asking our supporters to come out in large number and vote for us,” he said.

He was accompanied by his wife Rachel and MPs Janeth Sitienei (Turbo) and Oscar Sudi (Kapseret).

Low voter turnout has so far charactarised the exercise in the Rift Valley despite being one of Jubilee strongholds.

Uhuru Kenyatta: I may reach out to Raila Odinga after poll Reviewed by samrack on October 26, 2017 .

Share thisFacebookTwitterPinterestEmailWhatsAppUhuru Kenyatta: I may reach out to Raila Odinga after poll President Kenyatta and his deputy William Ruto have cast their ballots in the repeat presidential election. Mr Kenyatta voted at Mutomo Primary School in Gatundu South Constituency. BIRTHDAY Mr Ruto cast his ballot at Kosachei Primary School polling station in Turbo constituency a