Maraga, 66, was sworn in at State House on Wednesday after the National Assembly adopted the report from the vetting committee. 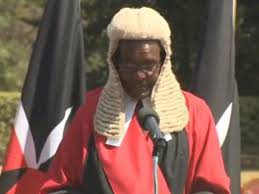 The new CJ, a staunch Christian with strong Seventh Day Adventist Church beliefs, said he will do his best to make the Judiciary a successful institution.

“Burden of delivery is high on me as Chief Justice, but I aim to succeed. When we allow institutions to thrive, they will do what is right,” Maraga said.

He said his interest is to improve the service delivery to Kenyans and fight corruption in the country and within the Judiciary.

“I will reduce backlog and become more accountable. I will fight corruption as part of new culture at judiciary,” he said.

“I will institutionalize the war against corruption to become part of the culture and strengthen the office of the Ombudsman.”

The appellate judge was vetted by a key House committee on the backdrop of three petitions against his appointment.

The public vetting by the Justice and Legal Affairs Committee was the final hurdle between Maraga and the coveted job, after grueling interviews by the JSC.

Maraga was nominated by the Judicial Service Commission on September 22.

One on One with Evelyne Wanjiru,Mary Githinji and Pst Lucy Paynter

One on One with Evelyne Wanjiru,Mary Githinji and Pst Lucy Paynter