Chase Bank has been placed under receivership for 12 months after making a net loss of Sh742 million, from a profit of Sh2.31 billion in 2014.

Central Bank announced the institution’s placement under the Kenya Deposit Insurance Corporation in a statement on Thursday.

“The bank experienced liquidity difficulties, following inaccurate social media reports and the stepping aside of two of its directors,” Njoroge said.

Chase Bank group MD Duncan Kabui and chairman Zafrullah Khan resigned on Wednesday amid growing public concerns over the  health of the bank . 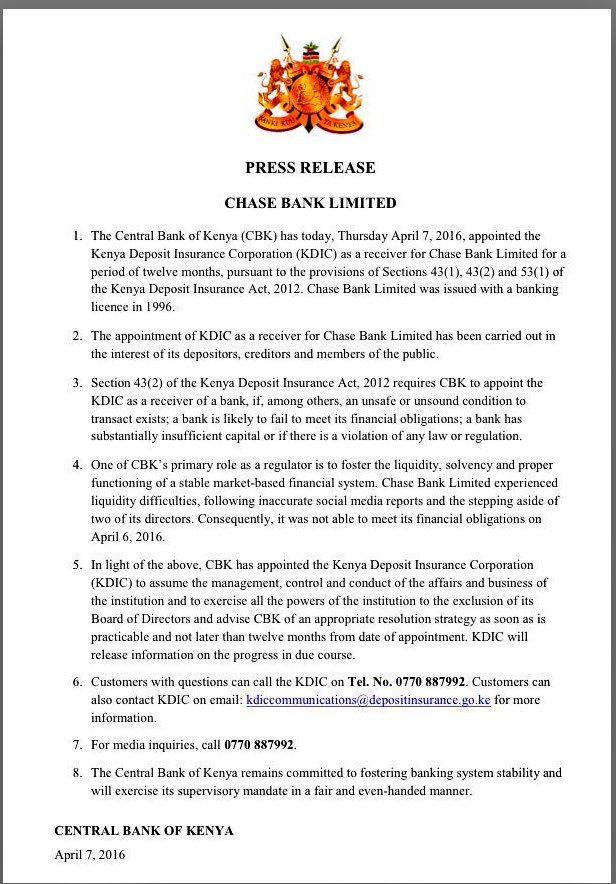 Njoroge explained: “CBK appoints a receiver if, among others, an unsafe or unsound condition to transact, a bank has substantially insufficient capital or if there is a violation of any law or regulation.”

He said the Insurance corporation was appointed receiver in the interest of depositors, creditors and members of the public.

Njoroge said KDIC will assume management control and conduct of the affairs and business of the institution licensed in 1996.

“It will exercise all the powers of the institution to the exclusion of its board of directors and advise the CBK of an appropriate resolution strategy as soon as it is practicable and not later than 12 months from date of appointment,” he said.

Central Bank  took over Imperial Bank in October 2015 and handed its management over to the KDIC over “unsafe or unsound business conditions”.

Dubai Bank is under  receivership following its take-over on August 14.

CBK said at the time that the bank was experiencing serious liquidity and capital deficiencies, raising concerns that it was unlikely to meet its financial obligation.