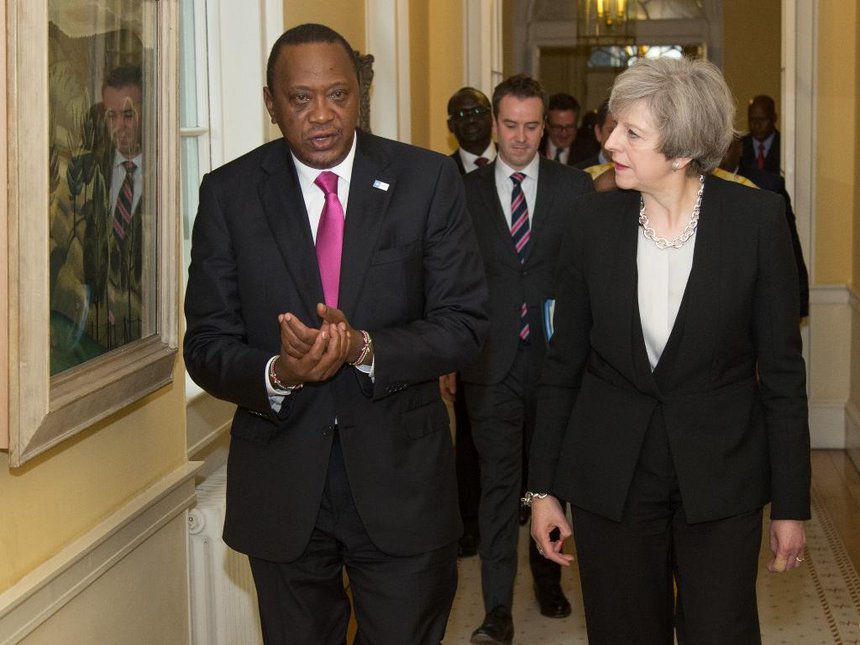 President Uhuru Kenyatta with United Kingdom Prime Minister Theresa May at 10 Downing street in London on May 11, 2017. /PSCU

Britain is still pumping millions of pounds of foreign aid into Kenya’s health service – despite the US pulling its support because of concerns over corruption.

US ambassador Robert Godec announced last week that America was cancelling its £16 million (Sh2.13b) a year payments to the African country’s Ministry of Health due to ‘ongoing corruption and integrity issues’.

Despite the move, Britain’s Department for International Development (DFID) is pushing ahead with an eight-year project costing taxpayers £106 million (Sh14.11b).

The US did not take its decision lightly as the massive cut will affect seven critical programmes and result in many job losses.

However, Mr Godec insisted no funding will be reinstated until accounting weaknesses are resolved. He said: ‘The US taxpayers want to see their money is spent appropriately and goes to the right causes.’

Kenya’s Medical Practitioners And Dentists Union leader Ouma Oluga publicly welcomed the dramatic move and said he was ‘not surprised because the ministry is riddled with accounting issues’.

Worryingly, the hugely expensive DFID programme operates in the very areas which have caused alarm to US officials. An investigation by USAID found that salaries and travel expenses were not properly accounted for.

Britain’s continuing financial support is all the more astonishing as some of its funds go towards providing free maternity care. Yet a probe by the Kenyan government’s own anti-corruption unit last year exposed a scandal in which £6.7 million, some of it intended for free maternity care, was diverted to private healthcare companies.

The country has long been plagued by serious political problems. President Uhuru Kenyatta was indicted by the International Criminal Court for inciting post-election violence in 2013 and the government’s Ethics and Anti-Corruption Commission is itself under investigation over allegations of bribe-taking.

The commission’s chairman, Philip Kinisu, resigned last August when it emerged that a company he owned had been awarded contracts worth £266,766 for supplying equipment to another government department, which is also being investigated for suspicious contracts it received from the Ministry of Health.

A DFID spokesman said it was unable to comment because of the forthcoming General Election.

The Mail on Sunday has been leading the campaign to overhaul Britain’s commitment to spend 0.7 per cent of national income – more than £12 billion (Sh1.6T) a year – on aid.

Share thisFacebookTwitterPinterestEmailWhatsAppPresident Uhuru Kenyatta with United Kingdom Prime Minister Theresa May at 10 Downing street in London on May 11, 2017. /PSCU Britons’ millions still flowing to ‘corrupt’ Kenya health chiefs Britain is still pumping millions of pounds of foreign aid into Kenya’s health service – despite the US pulling its support because of concerns