What Kabogo exit means for Jubilee 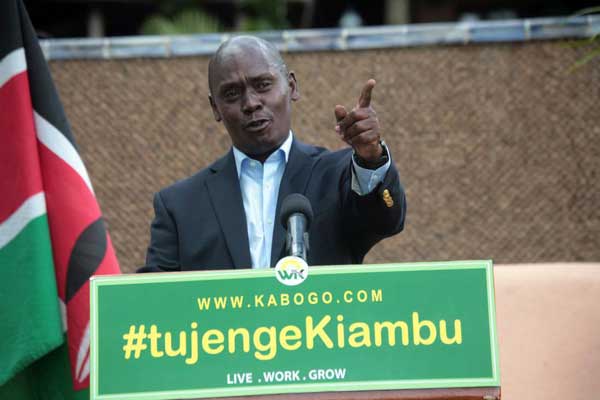 Kiambu Governor William Kabogo addressing journalists at his Kiambu home on May 14, 2017. He said that he will be defending his seat as an independent candidate on the August 8 polls. PHOTO | EVANS HABIL | NATION MEDIA GROUP

What Kabogo exit means for Jubilee

Kiambu Governor William Kabogo will be seeking to portray himself as a changed man as he joins the ranks of nomination losers on the ballot in August.

Mr Kabogo’s determination to show a different side of himself was evident at a press conference in his home, near Windsor Hotel, on Sunday where he announced his decision to seek re-election as an independent candidate.

The county boss said he had gathered evidence showing that he was the victim of propaganda and a flawed Jubilee nomination.

“Make no mistake, my silence in the last couple of weeks was as a result of a peace pact I wanted to honour,” he said.

Asked why he did not produce the evidence of malpractices during the nomination, he said.

“The younger Kabogo was a stronger, combative and abrasive Kabogo. This is the Kabogo who has been in politics for 15 years and is more mature.”

“Due to public demand, I have decided to honour the wishes of Kiambu people.”

Mr Kabogo was among several prominent politicians whose loss at the primaries surprised many, given his resources, influence and the power of incumbency.

The governor’s loss was attributed to anger at his leadership style and what his rivals said was the use of unsavoury language towards voters.

At his residence on Sunday, he sought to cast a different image, walking hand in hand with his wife from the house, past a pool to a manicured lawn where a green and yellow podium had been erected.

He started by wishing the women of Kiambu a happy Mothers’ Day.

The county boss said he was no longer in Jubilee and had chosen #tujengeKiambu (let’s build Kiambu) as his slogan.

Still, he has an uphill battle as the candidate from President Uhuru Kenyatta’s party in the head of state’s backyard has an overwhelming headstart against an independent.

Some independent candidates are reported to have met the President at an off-the-record meeting a week ago before he left for the UK.

Mr Kabogo said he was not among those who met Mr Kenyatta but would support his re-election bid.

The President refused to support any Jubilee aspirant, saying he would work with whoever won.

Independent candidates from areas with significant Jubilee support are seeking to become a third force during the August elections.

Mr Kabogo was among a group that met at Kigwa Conference Hotel on Kiambu Road on Friday.

He would be hoping to bank on his achievements to convince Kiambu people to re-elect him their governor.

“The development agenda that we have had is open for everyone to see. Our transformation as a county in the last four years is second to none,” the governor said.

What Kabogo exit means for Jubilee Reviewed by samrack on May 14, 2017 .