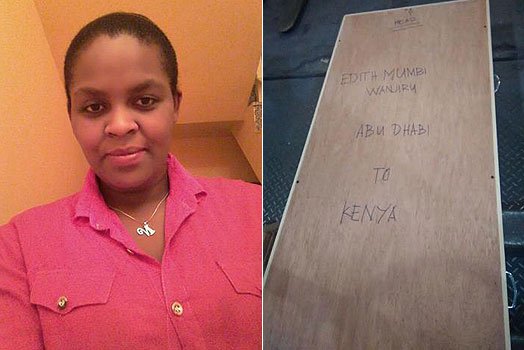 The body of a Kenyan mother who was attacked and killed in Abu Dhabi while protecting her employer’s children has finally arrived home.

Edith Mumbi was stabbed to death on May 10th, 2016 by burglars who had raided her employer’s house. She endured several stabbings while protecting her employer’s children from the attackers. She eventually succumbed to her injuries.

Strangely through, her employer never notified the

police about the incidentand instead filed a missing person report with the police.

Ms Mumbi’s family in Kenya became weary after she failed to communicate for weeks, prompting them to contact the Ministry of Foreign Affairs for assistance.

The confirmation of the death came four weeks after the incident.

“Edith Mumbi, in the process of trying to protect her employer’s children, got stabbed multiple times. She was admitted at hospital where she later died. Her body has been lying at the mortuary for nearly a month,” an official from Ministry of Foreign Affairs told the family.

Ms Mumbi body arrived at the Jomo Kenyatta International Airport on Saturday and was received by her mother and relatives after indetification.

According to the family, the deceased leaves behind a four year old daughter. She will be buried on Wednesday at her parents’ home in Ndenderu, Kiambu County.

Close friends said she was looking forward to coming back home to raise her daughter and start a small business.