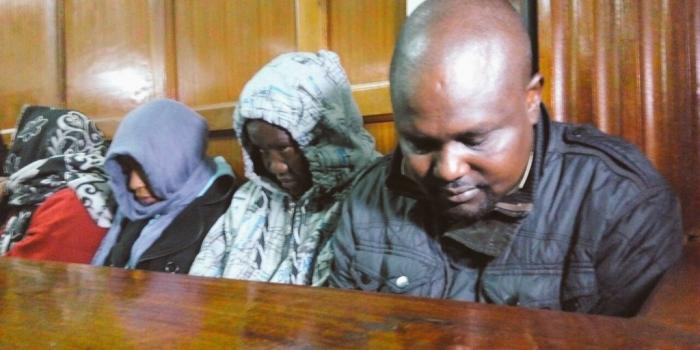 Three police officers linked to the murder of LawyerWillie Kimani, his client Josphat Mwenda and taxi driver Joseph Muiruri will remain in custody for the next two weeks.

The three were arraigned at Milimani Law Courts on Monday morning where their case was mentioned but the accused did not take a plea.

In his application, the Director of Public Prosecutions asked the court to detain the suspects until investigations were completed.

The DPP noted that probe into the mysterious killings was complex, hence security agents should be allowed more time to cover all angles.

“It is believed that the Respondents have other associates who are still at large. The Respondents were arrested on 1st day of July 2016 and investigations are not yet complete and the team of investigators require additional fourteen (14) days to complete investigations,” Deputy DPP Nicholas Mutuku said.

Mr Mutuku added: “It is in the interest of justice and within the discretion of this Honourable court to consider and grant the orders sought.”

He added that the authorities had crucial information that his office was following to help build the case.

Earlier on, Police Spokesman Charles Owino announced that the officers would be stripped of their positions and would, therefore, be arraigned in court as civilians.

The suspects are expected to appear in court after the 14-day period to answer to charges of suspected murder.

Meanwhile, lawyers on Monday began a one-week boycott of the courts to press for the prosecution of police officers accused of abducting and killing Lawyer Kimani, his client and the taxi driver.

On Saturday, Inspector General of Police Joseph Kimaiyo revealed identities of the officers whom he said were based at an Administration Police camp in Mlolongo.