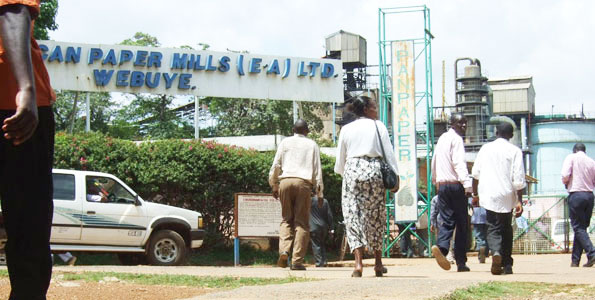 The billionaire Rai family has bought the collapsed PanPaper Mills for Sh900 million, paving the way for reopening of the factory that closed shop in 2009.

Jaswant Rai, the chairman of the business group, told the Business Daily that they had acquired the company and will revive it within the next few months.

The announcement is good news for Bungoma County, specifically Webuye town, residents where many people lost jobs or business deals when the firm collapsed more than a decade ago.

Rai Group has agreed to pump Sh6 billion into the paper mill over a five to ten year period.

“I am informed that this investment will yield close to 1,500 jobs for the people of Bungoma and Western Kenya within the next three years,” President Uhuru Kenyatta said Thursday while accompanied by Bungoma County leaders, including Governor Ken Lusaka.

“The good news also is that the investor has given an assurance that former employees of PanPaper Mills will be given priority as the initial employees to be re-absorbed into the business,” he added.

The purchase is a major coup for Rai Group, which has been angling for the assets for years, amid speculation they wanted to turn the plant into a timber business.

READ: Panpaper may be sold to a timber trader cheaply without regard for public gains

The Rai Group is not new in the paper industry. In 2005, it acquired the Mufindi Paper mills in Tanzania. PanPaper owed creditors Sh3 billion as of 2009 when it was closed, leaving thousands of workers jobless.

In 2010, then President Mwai Kibaki held a colourful ceremony in Webuye during which he switched on factory machines to signify revival.

But the factory was shut down shortly after though the government had pumped in Sh1.2 billion to revive it and pay off lenders who had placed the firm under receivership.

Six companies expressed interest in the firm but only two submitted technical and financial bids. One of the bidders decided not to proceed, leaving Rai Group to confirm the offer of Sh0.9 billion for the purchase of the assets.

“The receivers manager got the greenlight to negotiate with the remaining bidder. The bidder confirmed that their offer was the last and final offer. This is the agreed purchase price from which the lenders will recover their debt,” said Rai Group in a response to our e-mail queries.

Billionaire Rai family buys PanPaper for Sh900m Reviewed by samrack on May 1, 2016 .

Share thisFacebookTwitterPinterestEmailWhatsAppPedestrians walk past the closed PanPaper Mills in Webuye town. PHOTO | FILE  Billionaire Rai family buys PanPaper for Sh900m The Rai Group said on Thursday that it had acquired PanPaper Mills and will revive it within the next few months. The firm has agreed to pump Sh6 billion into the paper mill over