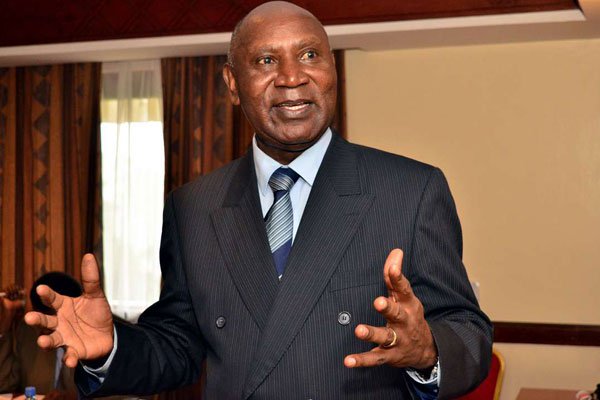 Auditor-General Edward Ouko has raised a red flag over the misuse of billions of public funds by state corporations and constitutional commissions in his latest report.

He blames the wastage on failure to follow procurement laws, over-payment of allowances, non-remittance of employees’ statutory deductions and a general disregard for public finance management principles.

The latest report comes after President Uhuru Kenyatta on Wednesday put on notice government officers who engage in corruption.

The government is struggling to finance its current budget, with an Sh84 billion shortfall in revenue collection targets, besides the huge foreign debt it has to service.

AUSTERITY
This year, the National Treasury is expected to pay about Sh700 billion in short-term commercial loans borrowed from international financial institutions and governments.

Treasury Cabinet Secretary Henry Rotich is planning to slash the Sh302 billion allocated to the counties in the current financial year by between Sh15 and Sh17 billion.

Though the county governments have protested the move, Mr Rotich has maintained that the government will only give what it has.

He has also announced austerity measures in the public sector, targeting domestic and foreign travel, hospitality and entertainment among other “unproductive” expenditure as the government seeks to bridge the revenue gap.

The others are the National Land Commission and Uwezo Fund.

READ: Doomed to fail? The trouble with special projects, funds

At the KNH, Sh841.4 million is reported to have been lost in a medical service contract, Sh411.8 million of which relates to the National Hospital Insurance Fund and Sh415.6 million to the free maternity programme.

The auditor has also cited anomalies in the expenditure of Sh7.7 billion in employee costs and the use of Sh500.2 million in overtime and medical allowances for the hospital’s doctors and nurses.

TENDER
The report reveals that a contract for the refurbishment of the hospital’s private wing was awarded to the third bidder, at Sh204.8 million, although the lowest bidder had quoted Sh148.9 million, resulting in an over-payment of Sh55.9 million.

The contractor was paid despite leaving the building with broken doors and poor paint work.

“The management did not provide explanations for the anomalies,” Mr Ouko said.

He also questioned the payment of Sh6.4 million for the provision of hot water at the hospital, saying the system only worked for five months in 2015 and broke down.

NSSF
The report also indicates that Sh21.4 million was paid in legal fees without the approval of the Attorney-General and that Sh764 million at the NSSF is being held in a suspense account due to lack of proper details of members from employers.

The purchase of Hazina Plaza in Mombasa at Sh450 million in 1994 has also been questioned, with the report saying that although the property was leased with an expected annual rent of Sh60 million a year, it has remained partially closed since 2001 due to failure by the tenant to pay rent.

Mr Ouko calls out the Geothermal Corporation for failing to pay Sh1.4 billion in corporate income tax for the 2015 financial year despite a Sh405.6 million Kenya Revenue Authority penalty for the delay.

PROCUREMENT
The procurement of rig move services for 40 rigs at Sh42.7 million is a subject of investigations by the Ethics and Anti-Corruption Commission over possible illegalities.

Although the corporation terminated the tender, the contractor wants to be paid Sh1 billion on account of loss of revenue on the remaining 24 rig moves and Sh13.4 million for the work done.

The report further indicates that parcels of land valued at Sh1.9 billion acquired by the pipeline corporation have no title deeds.

The auditor has also questioned the procurement of hydrant pit valves at Sh655.9 million through direct procurement, contrary to the requirements of the Public Procurement and Disposal Act of 2005.

UWEZO FUND
According to the audit, although a United States company was invited to bid, no documentary evidence was provided to support the tender award.

The National Land Commission is on the spot for failing to open an account to deposit the Sh19 million it spent on local and domestic travel.

The amount was instead banked in a personal account at the National Bank of Kenya, where several withdrawals were later made.

Uwezo Fund is on the spot for failure to prepare bank reconciliations for nine accounts worth Sh1.8 billion.