At least 30 dead, 22 hurt after bus collides with tuck at Migaa

The scene of the crash at Migaa along the Nakuru-Eldoret highway where a bus has collided with a truck on December 31, 2017. At least 27 people have been confirmed dead. PHOTO | JOSEPH OPENDA | NATION MEDIA GROUP

At least 30 dead, 22 hurt after bus collides with tuck at Migaa

At least 30 people have been confirmed dead after a Nairobi-bound bus collided with a truck at Migaa along the Nakuru-Eldoret highway.

Among the dead include the driver of the truck and his loader while 28 bodies were retrieved from the ill-fated bus.

The truck was heading to Eldoret.

Twenty two other people were seriously injured in the crash which occurred at around 3.30am Sunday.

The truck which collided with a bus at Migaa on December 31, 2017. Both its driver and loader died in the crash. PHOTO | FRANCIS MUREITHI | NATION MEDIA GROUP

Confirming the incident, Rift Valley Traffic Enforcement Officer Zero Arome said the speeding bus which was travelling from Busia was being driven on the wrong lane when it collided with the truck head on.

The injured people have been rushed to Molo Sub-County Hospital and the Nakuru Level Five Hospital.

Rescue operations are still going on at the scene.

The mangled wreckage of the bus which collided with a truck at Migaa killing at least 30 people on December 31, 2017. PHOTO | FRANCIS MUREITHI | NATION MEDIA GROUP

At the Nakuru Level Five Hospital, at least 22 survivors of the crash were brought in.

Seven were admitted with serious injuries on the head, chest and limbs. 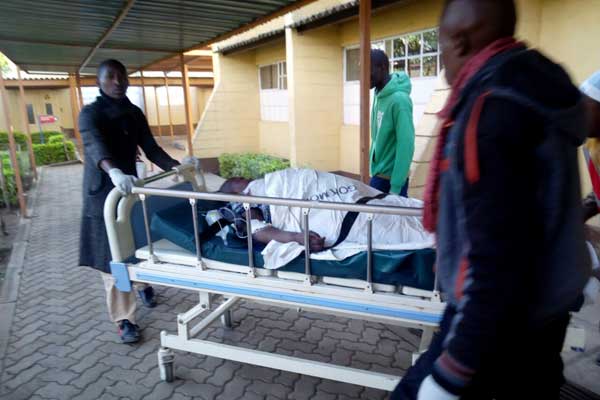 One of the survivors of the Migaa bus crash is brought to the Nakuru Level Five Hospital for treatment on December 31, 2017. PHOTO | REITZ MUREITHI | NATION MEDIA GROUP