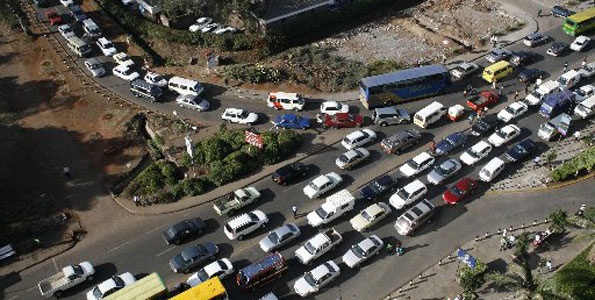 The second attack in two months on an Uber car in Kenya occurred Wednesday in Nairobi, Reuters reported.

Police said four men set the taxi on fire in the Kenyan capital the same day the transportation app introduced its services in Mombasa, the nation’s second-largest city.

The driver was not injured in the attack, police told Reuters, but the frequency of attacks on Uber vehicles around the world is indicative of a larger problem.

Drivers sit in traffic on a highway in downtown Nairobi, Kenya. Taxi operators in Kenya want the government to stop operations of ride-sharing app Uber, which has risen in popularity because of its cheaper fares. Kenya police say they have launched investigations into allegations of attacks on Uber drivers. (AP Photo/Sayyid Azim, File)

It has become a rather common occurrence for taxi companies and employees to protest, threaten and take legal action against Uber drivers, citing the company’s business model as the source of their frustration. Many have claimed that Uber’s cheaper fares are driving other taxi services out of business.

Kenyan cab drivers asked the government in February ban Uber from conducting business in Nairobi and threatened to halt transportation services if the demands were not met. The request was denied, but the government did say it would work on drafting new laws to regulate online taxi services, according to Reuters.

Uber has urged Kenyan authorities to condemn any acts of violence carried out by alternative cab companies, suggesting that these services simply need to deal with the competition.

“We are determined to end this madness where people are maliciously attacking and damaging other people’s property,” Nairobi’s police chief, Japheth Koome told the Guardian Wednesday.

Wednesday’s attack occurred shortly after a man hired an Uber to take him near Nairobi’s outskirts but ended up directing the driver to a dark alley, according to Koome.

The driver later told police that he witnessed four men approach the car but managed to escape, despite their attempts to restrain him, Koome said. The car, however, was not spared.

A similar attack occurred last month, when another Uber vehicle was also burned. The attackers were never caught, the Guardian reported.

Another Uber Car Torched in Kenya as Alternative Taxi Services Protest the Company Reviewed by samrack on March 23, 2016 .

Another Uber Car Torched in Kenya as Alternative Taxi Services Protest the Company The second attack in two months on an Uber car in Kenya occurred Wednesday in Nairobi, Reuters reported. Police said four men set the taxi on fire in the Kenyan capital the same day the transportation app introduced its services in Mombasa, the nation’s