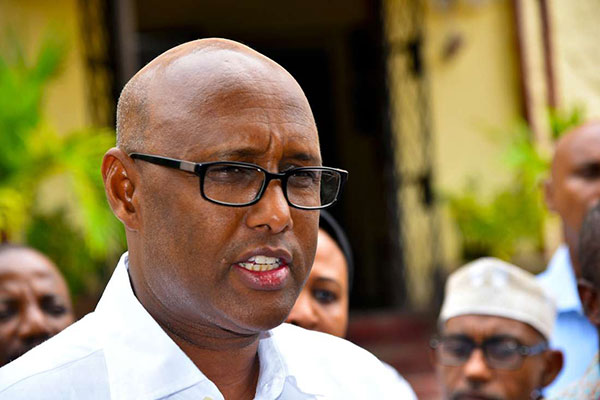 He is the gentleman extraordinaire. Always smart and humble to a fault.

When Adan Mohammed was plucked from a high-paying job in a blue-chip company to lead Kenya’s manufacturing dream, no one questioned his abilities.

He was leaving a lucrative job as the chief executive officer of Barclays Bank, one of the top five lenders in the country, which was earning him more than double what he would get as a Cabinet secretary.

The banker was the perfect choice to head the Trade and Industrialisation ministry, at least at that time.

In him and a few other nominees, President Uhuru Kenyatta had lived up to his promise of getting technocrats to take up offices and free politicians to do what they do best.

Besides his qualification and experience, the Harvard Business School MBA graduate also represented the minority communities that had for years been missing on the table when the national cake was being shared.

He would say the right words at his vetting in Parliament.

He promised to deal with counterfeits, revive key sectors, especially those that are labour intensive such as the textile industry, to provide jobs to the youth.

He said he would promote the private sector to lead speedy industrialisation, with the government only playing a minimal role. He got the job.

But the soft-spoken Adan Mohammed of Barclays Bank fizzled out as soon as he walked into the glamour of public office, never to return again.

His critics describe his colourless stint at the ministry headquartered at the Social Security House as nothing but a disaster.

Before he completely disappeared from the public eye, his performance had been short of expectation, lacklustre and uninspiring for a man who got first class honours and was always among the top in class.

More than five years down the line and two ministries to his name, he does not feature anywhere on the shortlist of top performing Cabinet secretaries in the Jubilee administration.

At the Trade and Industrialisation ministry, Adan simply failed to fly. He did not pretend to show that he understood the big public expectation on him from his docket.

Thousands of jobless youth were hoping his ministry would switch on Kenya’s manufacturing dream, and move it beyond the colourful blueprints he launched few months into his term.

The industries that were dying at the time he took over continued their painful and slow death.

Some of the manufacturing companies that were limping continued to stagger under his watch, while those that were exiting closed shop.

But it is unfair to blame all this on one man. He was not going to do magic alone, he was part of a government that needed to have prioritised manufacturing and throw enough resources at his department.

Being the gentleman he was, he chose to work with what he had, putting his head below the rest not to be noticed or cause any troubles.

When other ministers were complaining of underfunding and pushing the State to look at their direction, he was quiet, only talking about leather, hides and skins, perhaps what he knew best, having grown up in Mandera.

Defeated, the father of five took a back seat hoping for a miracle until the sugar scandal jerked him back into action.

Adan, alongside his Treasury counterpart Henry Rotich and former Agriculture minister Willy Bett, would be thrown into the public limelight after Parliament implicated them in the scam.

Under their watch, importers had shipped into the country large amounts of sugar, some of which was unfit for human consumption.

He would not survive it, and reading the mood in the country, President Kenyatta would transfer him to a less visible ministry of East African Community and Regional Development, perhaps to let him retire in peace.

“He has not delivered in any of his ministries. At his current ministry, we need to see him lead negotiations. He has not done a good job at dealing with the escalating trade wars between Kenya and Tanzania. We do not see a leader,” Tony Watima, an economist said.

“I would give him three out of 10. He has ideas but he has failed to implement anything. He had no visibility at all and, as a banker, we expected more. His handling of the sugar issue has been his biggest undoing,” Stephen Mutoro, Consumers Federation of Kenya (Cofek) secretary-general, said.

Adan Mohammed fails to shine as Cabinet secretary Reviewed by samrack on May 28, 2019 .