A Kenyan Becomes A US Citizen: Joins Donald Trump’s Republicans. Why ? 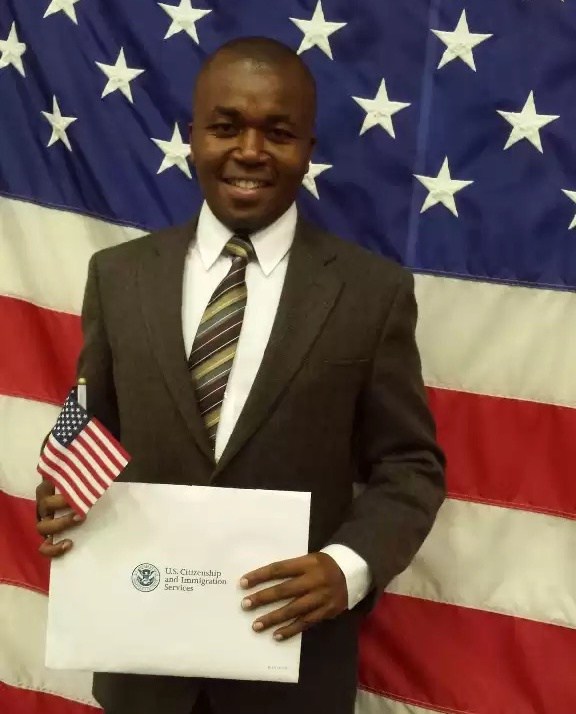 A Kenyan Becomes  A US Citizen: Joins Donald Trump’s Republicans. Why ?

Becoming a United States citizen is a long process. They call this country a nation of laws. That is why it  involves legal processes handed down from generation to generation! First, one has to become a permanent resident and wait several years for the residency to mature! Then one has to apply for citizenship and go through interviews which are legally binding and intrusive of all life. What this new Kenyan American citizen called “legal grilling”
When the young Kenyan told me he was becoming a citizen in Austin, Texas, I decided to travel there and see what goes on in an American Citizenship Ceremony I endured the long drive from Florida through the southern states to be part of this American becoming. But the other reason is to reflect on the journey that this young man has taken until now that he is a United States Citizen.
We all have our history and our  DNA is connected with others who we call ancestors. As you read this narrative, you are part of a mother and father, whom each had a mother and a father. If you were to draw a lineage, you would be surprised to find the Genetic makeup that defines you;  Traits of behaviour and physical identities that resemble an ancestor 500 years ago. In the same way, this new Kenyan America is named Timothy Kamau Nyenjeri. His father was named John Nyenjeri Kamau. His grandfather was Timothy Kamau Nyenjeri. And his great grandfather was Johanna (John) Nyenjeri Njoroge! You can see that his name Timothy Kamau Nyenjeri was the exact name of his grand father Timothy Kamau Nyenjeri who was a radio pastor in Kenya between 1959 and 1983.

Within the tradition of the Kikuyu, the tribe from which his ancestors became, the first born  son takes the full name of the grand father and the first name of the father as the last name. And the daughter takes the name of the grandmother, both from the father’s side. The second born son or daughter were named after the grandparents from the mother’s side. Like the Jewish tradition,this cultural philosophy, helped the tribe keep a record of lineage to avoid inter- marriage between close relatives. They did not want blood lines getting mixed up. Therefore the name Kamau and Nyenjeri would appear in one form or another and one could trace their heritage up to 500 years.
This young man’s grandfather was born in Yanduma in the region of Kiambu and Githunguri in 1885. When he was young, he migrated to a mission station where his parents sent him to sell bananas to the new form of creatures later called mzungu. He arrived at the mission station in 1905 and the christian missionaries took an interest in him. After converting him to Christianity, he became their partner and Johanna Nyenjeri Njoroge became the pioneer that established the Mission of Kijabe with its land mark law against drinking alcohol or smoking or selling these within its boundaries.  Other codes include not doing business on sundays. Theodore Roosevelt,  United States President 1901 to 1909 laid the foundation Stone in Kijabe in 1911. The stone still stands!

Almost all former Mau Mau detainees who went through Manyani prison (Located 250 KM from Nairobi towards mombasa) knew Johanna. They called him “the  Padre from Kijabe”! He was the pastor who ministered to Mau Mau detainees 1954ff. His name also appears in many historical books exploring the early Christian Movement in Kenya (Google Johanna Nyenjeri). Nyenjeri’s  Son, whose name this new Kenyan American bears, started Christian Broadcasting in Kenya. Once you follow this genealogical history, you understand why his becoming an American citizen has historical meaning. When Theodore Roosevelt laid that foundation stone, Johanna Nyenjeri Njoroge would never have thought that Kenyans would end up in Cedar Park, Texas! That would have been an unattainable postulation!
120 Years after the missionaries came from United States to Kijabe, Kenya, a native Kenyan with the DNA of the first Kenyan Christian Converts and Pastors took an oath to become a United States Citizen.
After witnessing the ceremony which had the old American Tradition and culture, we sat down to eat dinner at at The Oasis overlooking lake Travis. It is here that I inquired  which party he was going to join. His answer was pragmatic and well thought out, “I come from a heritage of Church Ministers who are Evangelicals. How can I move away from the faith of our fathers?” In other words, he is joining the evangelical movement which supports Donald J. Trump. No matter how controversial that may sound within the immigrant community, this new Kenyan American is keeping the faith. He is  joining the puritans who immigrated to the United States earlier than American missionaries migrated to Kijabe, Kenya.”Values!” He said with a smile!
Congratulations young man! I hope your citizenship makes a difference to humanity in  keeping with the evangelical idea that calls for mercy, grace, and the welcoming of strangers, including immigrants! He told me to check back on him ten years from now, “I will vie for the house” He smiled! To him and all American Citizens, Happy 4th! From this Kenyan Citizen!
Teddy Njoroge Kamau (PhD)
BBN TV
HTBluff Associates
Diaspora Messenger Senior Columnist.
A Kenyan Becomes A US Citizen: Joins Donald Trump’s Republicans. Why ? Reviewed by samrack on July 6, 2017 .

A Kenyan Becomes  A US Citizen: Joins Donald Trump’s Republicans. Why ? Becoming a United States citizen is a long process. They call this country a nation of laws. That is why it  involves legal processes handed down from generation to generation! First, one has to become a permanent resident and wait several years for