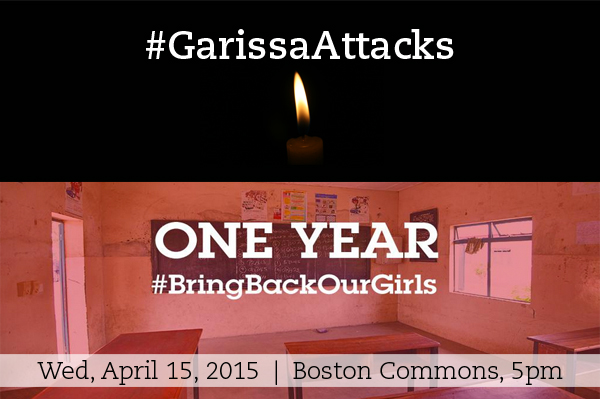 A 2nd candlelight vigil to honor the 148 students killed at Garissa University, Kenya and the more than 250 high school girls kidnapped in Nigeria last year will be held at the Boston Commons on Wednesday, April 15,2015.

The vigil is set for 5pm local time.The vigil is an initiative jointly put together by members of the Nigerian and Kenyan communities in Greater Boston.As African countries that witnessed attacks and massacres of varying kind from two of the world’s deadliest fundamentalist groups, our communities are troubled by the spate of killings.

The pain these acts of terrorism have caused in our homelands is huge.When Nigerians in Boston and friends protested the Chibok kidnap last year, they did so with the expectation that swift, strategic actions will be taken to rescue the girls, whose only crime was their desire to acquire education.

One year after, the Nigerian government and its allies have failed these girls and their agonizing parents. We are disappointed that the world has simply moved on.That these girls are still in captivity despite the international outcry and condemnation that greeted their kidnap last year, speaks to our collective failure as a global community.

The killing of 148 students in Garissa University last week came at a time when the country was reeling from the attack at WestGate mall in Nairobi and claimed the lives of 69 people from 13 countries.Boko Haram and Al-Shabab represent evil that must not only be condemned, but be degraded and destroyed. We are, therefore, calling for action, real action to rid Africa of these and other extremist groups. We are calling for real action to #BringBackOurGirls.

We are calling for action #Garrisa Attacks to ensure safely at all Kenyan learning and religious institutions that are targeted by Al-Shabab.

The lives of all these young students in Nigeria and Kenya matter and their future must not be left stolen.Expected at the vigil are members of the Nigerian and Kenyan communities in Greater Boston, as well as friends and believers in the fight at against terrorism.At the vigil, we will unite in solidarity with victims of similar attacks in other parts of Africa, the Middle East, Asia and the world over. Our charge-the world must rise to the threat posed by these fundamentalist groups.Their existence is a threat to our common humanity and must be resisted.

Organizers:
The vigil is being organized by a coalition of Nigerians and Kenyans in Greater Boston and students from Harvard, MIT and Boston University.

Share thisFacebookTwitterPinterestEmailWhatsAppPhoto:#BringBackOurGirls BOSTON A 2nd candlelight vigil to honor the 148 students killed at Garissa University, Kenya and the more than 250 high school girls kidnapped in Nigeria last year will be held at the Boston Commons on Wednesday, April 15,2015. The vigil is set for 5pm local time.The vigil is an initiative jointly put