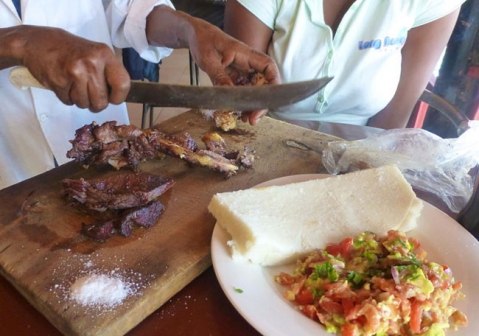 Diaspora folks may be the most condescending and annoying lot, but what you cannot fault is their immense love for their motherland. While living abroad often gets into their head, they certainly wish things were different and they will probably troop back home to live happily ever after.

Every Kenyan family in the US eats ugali and sukuma wiki. Courtesy of Mexican farmers and Indian milers, they have their favoured maize flour. Many in the mid-western states and the south have their farms and gardens where they pick their managus and osuga.

Kisiis especially run their SDA churches, same way as Kenya. The singing and the preaching is in Swahili and at times in Ekegusii. States with sufficient number of Kisiis such as New Jersey, Minnesota and North Carolina, have at least two SDA churches that cater for their spiritual needs.

With so much internet, the Kenyan abroad is permanently online, snooping old friends and relatives for gossip and some laughter. They will ask you a million questions; which directions is Kenyan headed Why is there so much corruption Do you think Uhuru will win in 2017 and you have to endure that.

Every Kenyan in their car owns a collection of Kenyan music. Slightly older generations prefer the benga tunes from their respective community. Younger ones are more at home with the early Kapuka hits that made Nameless and the Ogopa Deejays stable famous. You will never appreciate local music until you are stuck in white neighbourhood where people would rather talk to their dogs than to their neighbour.

It will not be a stretch to say that diaspora people read the Kenyan newspaper more than the locals. Many have the local dailies on speed dial and every break they catch, they are trying to understand the latest Sonko shenanigans and the inevitable next corruption scandal.

6. Living in the same neighbourhood

In states populated by several Kenyans, many prefer living in the same locality. That means they bump into each other in the local bar. But this has a downside as the backbiting, backstabbing and infidelity among Kenyans is soaring.

Another innocuous way that Kenyans keep it local is living near their tribesmen. Minnesota is for Kisiis, Boston and Texas for Kikuyus. This means you are likely to meet your clansmen for political banter and investment talk.

This is positive as it makes mobilisation when there is a problem easy. It makes sharing and exchanging goodies since there is somebody invariably traveling to Kenya. The downside is that it deepens the ethnic animosities that is tearing us apart.

Kenyan in the diaspora are the most generous. They are always helping each other when there is trouble. As much as possible they try to help each other during funerals, bailing out those arrested, and the sexually frustrated individuals do help each other. Makes sense.

Some parents are keen to teach their young children local languages and proper African culture. There are learning centres in various states dedicated to this. The centers serve as places where schools drop off kids and they are left to learn so that parents can pick them later when from work.

10. Bringing their families over

Although a big challenge, those who have earned American citizenship usually have a chance to bring their parents over, especially mothers who come to visit and bond with grand children before they travel back home. When around, it creates that homely feeling, you will think you are in the village.

Share thisFacebookTwitterPinterestEmailWhatsApp10 Ways Diaspora Folks Keep it Kenyan While Living Abroad Diaspora folks may be the most condescending and annoying lot, but what you cannot fault is their immense love for their motherland. While living abroad often gets into their head, they certainly wish things were different and they will probably troop back home to