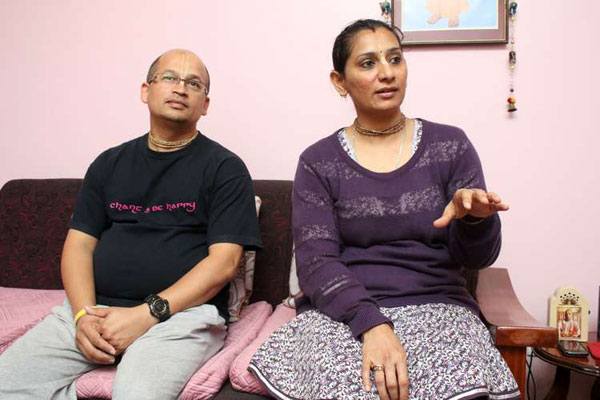 An Indian family in Kenya has caused a storm over an advertisement in a local newspaper inviting grooms to apply to marry their 27-year-old daughter.

The lady, whom the family says is currently working as a finance manager, holds an undergraduate degree in applied accounting and is currently pursuing a post-graduate qualification, also in accounting.

It is that little fact — of being educated — that is befuddling Kenyans who have commented on the advertisement, and who see arranged marriages as a preserve of the illiterate and primitive.

However, for the Gujarati family, nothing is odd about their advertisement as they are only practising an age-old tradition that has survived the onslaught of both educationand civilisation on their culture.

To them, they say, the right man for their daughter’s hand must reside in Kenya, and they go on to provide an e-mail address through which interested and qualified men should send their applications.

While most Kenyans question the audacity of this family to advertise for a suitor for their daughter, the Nation has learnt that the practiceis rife in the country, especially in the Gujarati community.

Ms Prasanta Dasi, a nun and marriage counsellor based at the Hare Krishna temple in Ngara, says arranged marriages cater not only to physical matching, but also emotional and intelligence similarities.

“Arranged marriages are for the benefit of those getting married,” says Ms Dasi. “Parents do it out of love for their children. There are several parameters such as physical attributes, size, skin colour, cultural background, age and education. You don’t want to pair a beautiful boy with a beautiful girl and later realise he is uneducated.”

Mr Parivartan Sharma and his wife Sarika are one such couple. They were married 15 years ago after Mr Sharma’s mother placed an advertisement in the Times of India in December 2000, giving a simple profile of her son.

“There was no photo,” his wife Sarika says. “It was a simple announcement that mentioned he worked as an engineer in Kenya and earned a five-figure salary. Then there was a number and an e-mail address at the bottom.”

Sarika’s father saw the advertisement and contacted the Sharmas.

At the time, Sarika was in the last semester of a master’s degree programme at the Asia Pacific University in India, and a few days later she was taken to see the family that would soon accept her as one of their own.

“Sharma’s mother asked me a few questions; about my education background, if I knew how to cook and stitch. I think she interviewed me!” says Sarika.

Her family returned to their village, but as soon as they arrived, Mr Sharma’s mother called and asked them to return because she had really liked Sarika.

Meanwhile, the mother also called her son in Kenya and asked him to travel home as soon as possible.

Sarika and Sharma met for the first time on January 15, 2001, and got married 14 days later, on January 29. And then Sarika packed her bags, put off her MBA and moved to Kenyan with her new husband.

Now officially referred to as Mr and Mrs Sharma, they are both well-educated and highly exposed individuals, but they opted for an arranged marriage as opposed to a love marriage because they believe parents make the best decisions for their children.

“I come from an orthodox family,” says Mr Sharma. “We are very principled. There is immense respect for the head of the family. Decisions made by parents don’t just come with a lot of experience, but also a lot of blessings. And when we obey our parents, we attract blessings.”

The Sharmas admit that the first year of their marriage was tough as they learnt and adjusted to each other, but their religion — Hare Krishna — played a major role in helping them discover the true purpose of marriage. Several milestones, such as the birth of their son Tilak Sharma, now aged 14, also strengthened their union.

Sarika says the secret to a happy marriage, whether arranged or not, is to forgive and forget the mistakes of those you love.

“Success in marriage lies in the relationship’s foundation. If based on the superficial material concepts of beauty, riches and fame, it dwindles with time and leads to frustrations,” she says.

Mr Umapati Dasa and wife Shyam Priya, both in their 60s, are a living testimony of that “secret”. Their marriage was arranged when they were aged 14 and 13, respectively, and today they have been married for 48 years.

“Family and culturalvalues were the most important things that my parents considered before choosing a wife for me,” says Mr Dasa. “They say if a tree is good — in this case the family — then the fruits — children — are also good.”

His wife says it was love at first sight for her. “I liked him. He was nice when I first met him. I felt really good.”

Dasa says his parents spotted and booked Priya for him when she was 11 years old, and he 12. They waited for two years before marrying them off. Today, the 13-year-old girl he married has grown to become his “best friend”.

Priya, on the other hand, says she has become so attached to her husband that she cannot eat before first feeding her husband. Even if he gets stuck in traffic and arrives home at midnight, she will not eat until he has, she says.

Share thisFacebookTwitterPinterestEmailWhatsAppIndian Family in Kenya Posts Newspaper Ad Inviting Grooms to Mary their 27-Year-Old Daughter An Indian family in Kenya has caused a storm over an advertisement in a local newspaper inviting grooms to apply to marry their 27-year-old daughter. The lady, whom the family says is currently working as a finance manager, holds an