Why your ugali and sukuma cost more 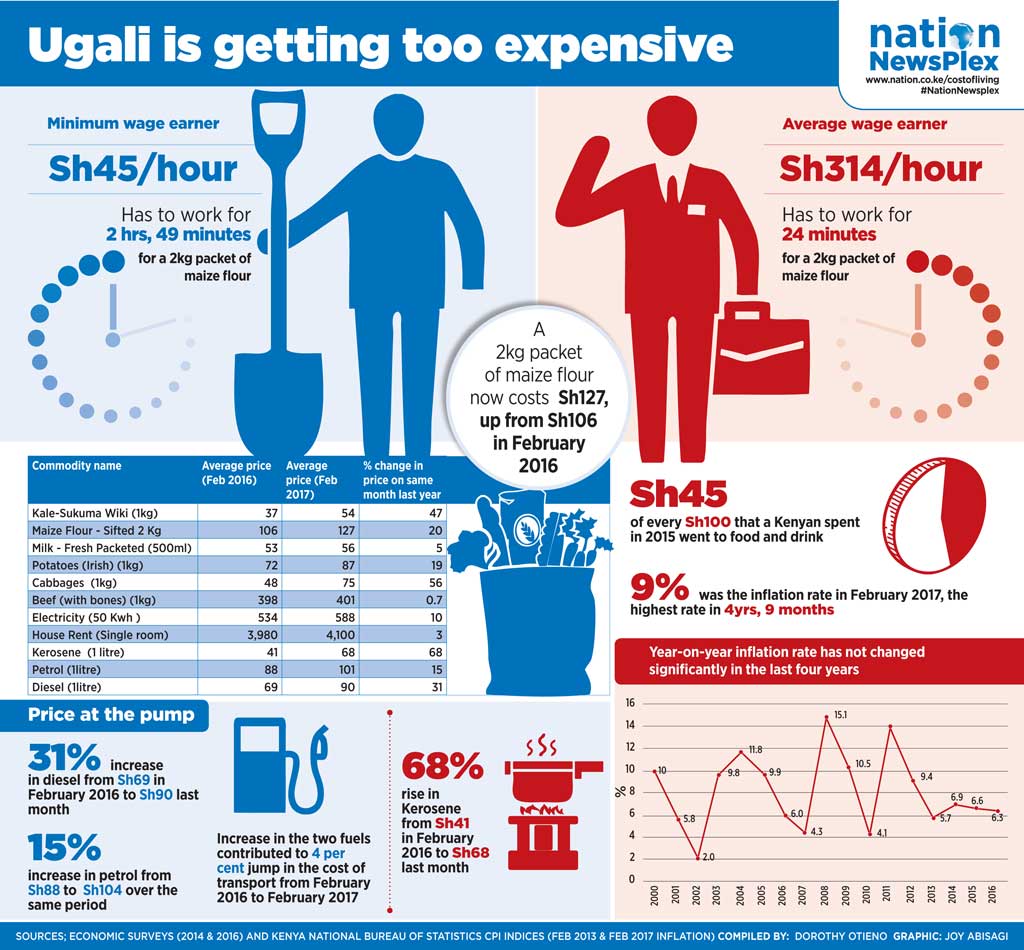 Why your ugali and sukuma cost more

The cost of a meal just got dearer, according to the latest inflation data from the Kenya National Bureau of Statistics.

The cost of maize flour, sukuma wiki and cabbages, milk and kerosene has risen sharply, driving up the cost of living and putting a strain on the budgets of the poor and middle class families.

Inflation is the rate at which the prices of goods and services rise over time, resulting in money losing value. That means that with inflation increase, Kenyans spent more money to buy less goods in February compared to January.

With the exception of the rich, many Kenyans are struggling to keep hunger at bay as food prices continue to rise faster than the average and minimum wages, according to investigations by the Nation Newsplex team.

The analysis shows that a worker who earns the average wage has to work for 24 minutes to afford a 2kg packet of maize flour, which costs about Sh127.

In the same vein, an individual who earns the average minimum wage has to work for at least two hours and 49 minutes to buy the same packet of unga.

The cost of food and non-alcoholic drinks has increased by 45 per cent since February 2013, with 17 per cent of the rise happening between February 2016 and last month.

The average and minimum earnings have grown at a slower rate over the same period.

In Nairobi, Kisumu and Mombasa, average minimum earnings increased from Sh15,357 to Sh17,200 during the same period while in county headquarters and towns within Nairobi’s environs it rose from Sh14,267 to Sh15,980.

In the past year, sukuma wiki sold for an average price of Sh37 a kilo in February 2016. Last month, a kilo cost Sh54.

The price of cabbages rose even more steeply. Last month, a kilo cost an average of Sh75, representing a 56 per cent increase from Sh48 in February last year.

Increases in meat prices were a lot more modest. The price of beef with bones rose by less than one per cent from Sh398 to Sh401 while the price of tripe (matumbo) went up from Sh241 to Sh251.

This means that most middle and lower class Kenyans have to do without basic foods and other necessities to make ends meet.

An earlier analysis by Newsplex found that Kenyans spend the lion’s share of their income on food and drinks. For every Sh100 that a Kenyan spends, Sh45 goes to food and drink. Enjoying three square meals a day remains beyond the reach of many as hard times bite.

Drought in various parts of the country contributed to the rise in food prices.

The steep rise in the cost of fuel has also contributed to hard times. The price of kerosene, the fuel used for cooking and lighting in low-income households rose by two-thirds from Sh41 in February 2016 to Sh68 last month.

Diesel rose by a third from Sh69 to Sh90 and petrol by 15 per cent from Sh88 to Sh101 over the same period. The increase contributed to the rise in the cost of transport.

The cost of healthcare rose by four per cent and education by three per cent.

Why your ugali and sukuma cost more Reviewed by samrack on March 3, 2017 .

Month-on-month inflation rate in February stood at 9.04 per cent the highest rate in four years, nine months: Pic: Photo Courtesy Why your ugali and sukuma cost more The cost of a meal just got dearer, according to the latest inflation data from the Kenya National Bureau of Statistics. The cost of maize flour, sukuma wiki and