Ruiru Sub-County in Kiambu County is one of the most populous areas in Kenya, according to data from the 2019 census.

This is neither an accident nor a coincidence.

The dormitory of the capital Nairobi is now the sixth most populated urban area in Kenya and, by far, outstrips major towns in the country.

Eldoret, a Rift Valley town eyeing the city status together with Nakuru, for instance, with 475,716 residents, is less populated than Ruiru.

Half the population of Ruiru works in Nairobi, only 26 km away, while the other half comprises traders.

It is no wonder Ruiru residents consider themselves as ”living in the city”.

So, what is driving this population surge in Ruiru?

A stone’s throw-away proximity to the capital, ease of access due a good road network, affordable housing and relative safety make

Ruiru the dream place to live in for hundreds of Nairobi’s working class and traders.

Populous localities of Kahawa Wendani, Kahawa Sukari and the low-scale neighbourhood of Mwihoko are all within Ruiru Constituency.

The surge in the area’s population has been as a result of several factors, key among them infrastructure development.

The area is served by a reliable road network, owing to its proximity to Thika Road.

This convenience has worked for both commuters and motorists.

Ruiru is home to several institutions of higher learning,

among them the main campuses of Kenyatta and Zetech universities.

Other universities such as the University of Nairobi and a host of other mid-level colleges have campuses in the area. 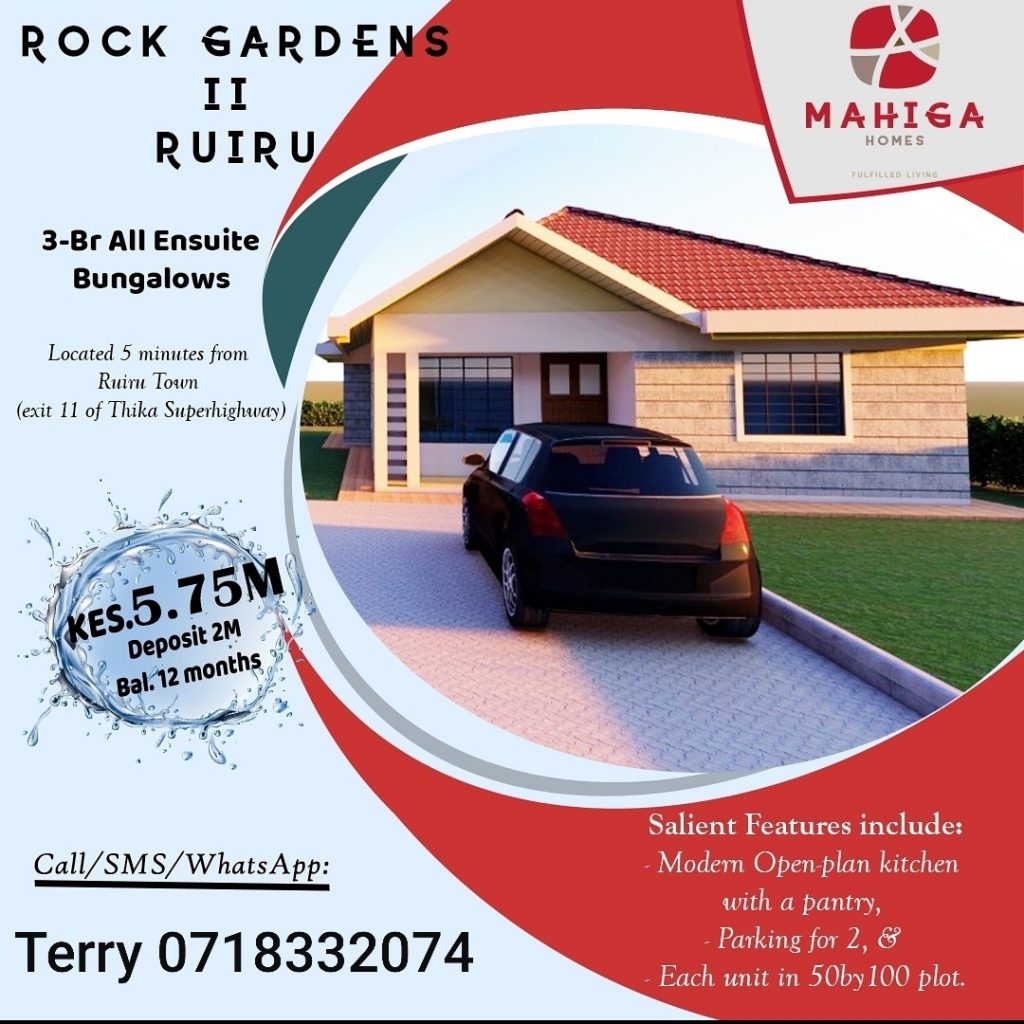 Notably, most of the land in Ruiru used to be under coffee only 15 years ago.

But, frustrated by the perpetually declining fortunes from the crop,

owners of coffee farms cleared plantations and invested in the more lucrative venture of residential houses.

The result has been a housing boom in the last one decade.

From serviced apartments to gated communities and budget residential areas,

Northlands City, Tatu City, River Run and Varsityville are some of the

projects that have sprung up in the area to respond to the growing demand for housing.

From as low as Sh8,000, one can rent a decent bedsitter in Ruiru.

One-bedroom houses in the area go for between Sh12,000 and 15,000 per month, making them affordable to the city’s working population.

Ruiru, which has more room for development.

This mass movement has pushed the arc of demand for housing higher, the result of which has

been a rapidly growing real estate business in the area.

Additionally, students who are not housed within their universities and colleges reside in Ruiru and its environs.

This has consequently pushed the population even higher.

When he moved to Ruiru three years ago, Joseph Onditi was a student at Kenyatta University.

His desire was to live in a less crowded neighbourhood that is safe and affordable.

”I preferred Ruiru to Wendani, Sukari or Roysambu that are crowded with students. It’s also close to

Githurai market where food is cheap,” he told the Nation in a recent interview.

Even after leaving university last year and finding a job in Nairobi, Onditi has no desire to leave the area.

”Bus fare to town is fairly low and I can move easily. It’s especially low during off-peak hours,” he adds.

But it is the fast infrastructure development in the area that Ruiru owes its steep growth to.

The construction of the eight-lane Thika Road in 2010 opened up the area to more investment,

making it a robust business hub away from the city.

Shopping hubs such as Spur Mall and Unicity Malls have all come up after the building of the highway.

With these malls being within a five-kilometre radius, residents of Ruiru do not have to travel to Nairobi for most of their shopping.

Construction of the Eastern Bypass, which links Thika Road and Mombasa Road, has equally triggered an influx of people, mostly traders.

Businesses that line the entire stretch of the road are a testament to the growing investment fortunes in the area.

The majority of these traders live within Ruiru.

Still, Ruiru is an industrial hub.

which employ hundreds of people, operate from the area. Employees of these companies reside within the constituency.

South African Economy Is in Recession, Kenya Is Next

South African Economy Is in Recession, Kenya Is Next