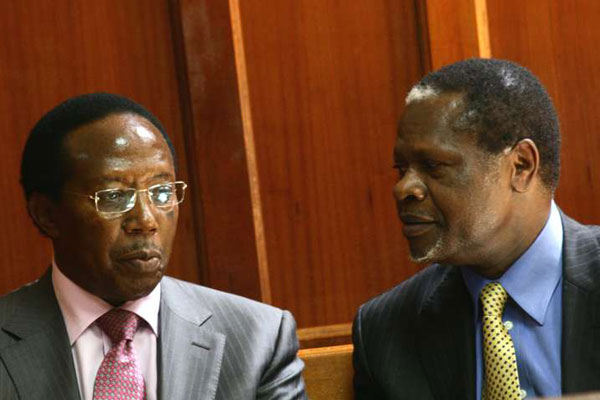 Former Finance Minister Chris Okemo (right) and former Kenya Power boss Samuel Gichuru during the mention of an extradition case against them at a Nairobi court on February 28, 2013. The High Court on December 18, 2015 failed to stop the extradition proceedings. PHOTO | BILLY MUTAI | NATION MEDIA GROUP

Of all the corporate fat cats of the Moi era, none has gone through a rough patch more than billionaire Samuel Gichuru – a bitter divorce, a battle over his estate, and the collapse of some of his businesses.

It is not the kind of plunge that Gichuru, with a fortune fit for Mayan emperors, expected – least in his retirement – after rising like a phoenix in the 1980s and 1990s.

A few days to Christmas of 2015, the rags-to-riches former Kenya Power and Lighting supremo added a new cap to his steady cascade of troubles: He lost an attempt to extradite him to face money laundering charges on the Island of Jersey, a dependent territory of the United Kingdom whose population is slightly above 100,000 people.

Now, we may have to say goodbye to him.

Jersey is the island where Gichuru decided to secretly put his money from 1981, banking millions of dollars he got disguised as consultancy fees from foreign firms that won multimillion-shilling tenders with Kenya Power.

Only a few people knew about the secret accounts, and one was his wife, Salome Njeri.

Then they fell out and she let out the cat locally in her 2006 divorce papers.

As with his divorce case, the media coverage of Gichuru’s extradition ruling was dismal, albeit negligible.

But Gichuru and his co-accused, former Cabinet minister Chris Okemo, may have to stage one final fight to protect the loot they received from KPLC-contracted companies.

They could as well be jailed!

In years to come, perhaps, details from the case will be a 101 on how to bilk money from the government tenders – and never get far.

The case will also help us unravel how bureaucrats in the Moi government opened accounts abroad, where they got the money from, and how they stashed and managed the loot they got.

How a Kenya Power employee who rose from a junior company secretary to managing director managed to become a multibillionaire, with a fortune bigger than many listed companies still baffles many.

But it happened. During the divorce case, the court was told that Gichuru’s estate was worth Sh100 billion – enough to finance four Thika Superhighways!

Gichuru’s fight for his billions has now shed more light into his dealings and the strange world of corporate malfeasance.

It is also a pointer of where the politically correct get their billions from.

It all started in 1981, when Gichuru, a company secretary by training, flew to the Island of Jersey and opened a personal offshore account to put the proceeds of his “consultancy and business introductions”.

Any business that desired to carry out multimillion-shilling deals with Kenya Power, according to the extradition papers, had to pay some introduction fee – in essence a bribe – into the Gichuru account in Jersey.

By this time, his financial advisor was the Jersey office of Deloitte & Touch, which in 1986 advised him to register a company to handle the proceeds.

They told him that his needs would be better served by a limited liability company, according to court records in Jersey.

Thus, in August 1986, Gichuru registered a company known as Windward Trading Company Limited and appointed a Jersey company, Walbrook Trustees, as the administrator of the offshore company.

Walbrook was to provide for the company’s directors and secretary.

Walbrook provided the signatories to these accounts and Gichuru was not one of them.

It is this camouflage, a banking mask, that initially made Jersey a safe haven for illicit funds.

That way, Gichuru’s name featured nowhere in the new outfit and so he thought both the funds, and himself, were safe. The mask was on somebody’s face.

All went well until May 2002, when Walbrook refused to make any further payments to Gichuru from these accounts as the Kibaki regime started hunting for funds stashed abroad by Kanu honchos and corporate carpetbaggers.

It is this initial fight to get his money from Walbrook that exposed Gichuru’s accounts – although the Jersey Court case went on silently.

At the heart of these accounts were several British companies that paid bribes to get tenders from the government over the years.

One of these was Knight Piesold (KP), which was involved in designing yet-to-be-built Ewaso Nyiro dam.

“It was impossible to do work in Kenya without paying commission to important political figures. It was like a tax. KP paid such commissions to various people. Without doing so, we would never have been able to work there. One person we paid was …. Samuel Gichuru,” said Peter Garrat, an official with KP, in the Gichuru extradition papers.

That is where Kenya Power, with projects worth billions of shillings, came in.

In order to hide the transactions, KP, according to Jersey records, usually wired Gichuru and Okemo’s commission through a company known as Camargo “justified by vague invoices…dictated by KP.”

Once Camargo received the money, it would deduct 2 per cent and send the balance to Gichuru’s Windward and Okemo’s accounts.

Although Gichuru was the MD of KPLC, he also masqueraded as Knight Piesold’s agent and thus charged them agent fee for all the contracts that they received.

Former Kenya Power Managing Director Samuel Gichuru (right) with family members after a Mass for his wife, Salome Njeri, at All Saints Cathedral in Nairobi on May 21, 2010. PHOTO | TOM MARUKO | NATION MEDIA GROUP

Every time Knight Piesold’s was paid by KPLC, Gichuru’s agent fee was passed on to KPLC, which was “inflated”.

“This evidence is supported by the records which show that the greater part of the payments to Gichuru and Windward came after KP was paid millions of pounds by KPLC with respect to a hydro-electric power project known as Ewaso Ngiro and that commissions were included in Consultancy fees,” says court records.

It is also at this time that Messrs Garratt and Illes helped Okemo to open his bank accounts in Jersey to facilitate his payments. Okemo was by then minister for Energy.

It is Gichuru who signed the award document for the £43 million Ewaso Nyiro contract and much of it was paid upfront to Knight Piesold to enable Windward to get its consultancy fee quickly via Camargo – the shell company created to invoice.

The invoices were simply written: “For services rendered in Kenya in connection with Ewaso Nyiro.”

It was only after the World Bank expressed severe criticism of the project that payments to Camargo stopped – or rather, according to the papers, “KP and Gichuru worked together to resolve this problem, including by agreeing to create backdated correspondence.”

Mike Durham, a director of another company, Mort MacDonald, that made payments to Gichuru, says in court records that they knew that they were paying bribes.

“I knew that (our company) had arrangements to look after Gichuru. He was not an agent in the proper sense of the word. He was our client. He was a distributor of work, although I don’t know what KPLC’s internal processes were and he was good to us. Gichuru was not doing anything for us apart from being our client. The only purpose of these payments was to help Gichuru to give us contracts and help us have a good relationship with him”.

In MacDonald’s books, payments to Gichuru’s bank accounts in Jersey were described as “agency fees” in the early 1990s before they changed to “computer charges” in the late 1990s.

“Plainly Windward had provided no such services,” the court papers says.

CORRUPTION
In one of his internal memos, Mike Durham had laid terms that also expose the level of corruption: “All arrangement with SG (Samuel Gichuru) are handled via WLPU. The current levels are 8pc to the SG mafia and 5pc to ANO (who happens to be a minister and part of the SG mafia – the other mafia members are not aware of the separate 5pc figure apparently.”

Mike Durham told investigators that WLPC referred to Knight Piesold and that “SG Mafia” referred to those with Gichuru.

This was one of the many payments that were made this way.

This was for “consultancy” for the building of the Kipevu Diesel Power plant, which was built and operated by a private company that sold electricity to KPLC.

In all these agreements, the office of the Attorney-General, the Ministry of Energy and KPLC were always in the picture.

“The ministry of Energy, and in concert with Gichuru, chose who were to prequalify to submit tenders,” says the court papers.

The papers say that Okemo’s receipts from Windward were between August 2000 and August 2001 during a period that Gichuru’s company was receiving significant payments from Wartsila.

Okemo is said to have opened his bank accounts while en route to Finland to meet Wartsila and that is when he granted them a letter of undertaking.

Only Okemo, according to the court papers, had the authority to give Wartsila the papers they needed to advance with the project.

If the project was approved, Windward – or rather Gichuru – also got its consultancy fee.

Another company, John Brown Engineering, paid Windward £451,037 after it was given a tender to install a gas turbine for KPLC’s Kipevu power station in 1986.

Although this turbine broke down in the 1990s and the company had to install a new one, it was asked to pay Windward some £386,000 “in return for this business”.

Actually, in May 2000, John Gillespie of Kvaerner Energy (later bought by John Brown Engineering) wrote to colleagues about these payments that “the award of the contract involved a written agreement with the Managing Director (S Gichuru) of Kenya Power & Lighting to pay a commission sum of £380k to his offshore company – Windward Trading.”

These agreements, according to the papers, were reached before the main agreements with KPLC were signed and that meant that the cost of Gichuru’s commissions was part of the contract price.

“These fees were not identified to KPLC as payments for Gichuru. They were hidden in the tender price,” one of them writes.

The companies that paid were many.

Some payments were layered through various personalities, hidden through dummy companies in the energy sector but all ended up at Windward.

With all these evidence collected, warrants for the arrest of Gichuru and Okemo were issued by the Royal Court in Jersey on April 8, 2010 and April 20, 2011 respectively.

They then started a struggle to stop the extradition. For the last six years, they have been fighting to stop their transfer to Jersey.

A SECOND WIFE
Meanwhile, Gichuru built a multibillion-shilling empire in Kenya. By the time of his divorce, his account at HSBC had $10 million.

It included five acres in Karen, Dolphins Palms in Mombasa, three townhouses in Kileleshwa and two flats in Hurlingham.

Njeri died before the property case had been determined.

Another woman, Esther Njeri, emerged and claimed to be Gichuru’s wife too and he had to fight her in court.

Meanwhile, Gichuru’s struggles to get his Jersey money continues shortly. So much for a fat cat.

Former Finance Minister Chris Okemo (right) and former Kenya Power boss Samuel Gichuru during the mention of an extradition case against them at a Nairobi court on February 28, 2013. The High Court on December 18, 2015 failed to stop the extradition proceedings. PHOTO | BILLY MUTAI | NATION MEDIA GROUP Why Moi era billionaire