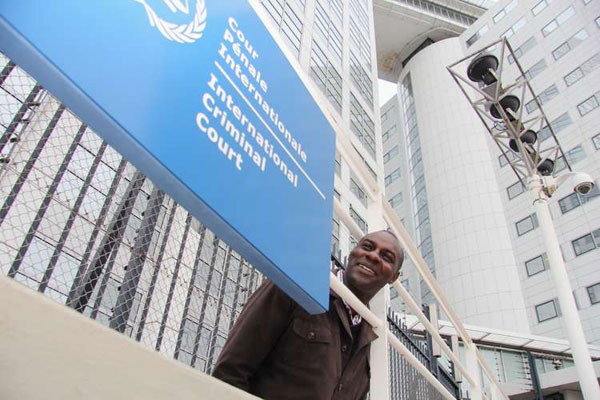 A Kenyan outside the head quarters of the International Criminal Court in The Hague, the Netherlands on October 31, 2013. PHOTO | BILLY MUTAI | NATION MEDIA GROUP

The world is struggling to understand the meaning of the decision by three African countries – South Africa, Burundi and the Gambia – to abandon their membership of the Rome Statute. The world is also watching to see if other countries, including Kenya, will join the three that have left the ICC.

While the three countries that have left the ICC are like chalk from cheese, they, however, share a political situation in which the leadership in each country is facing significant domestic resistance.

In particular, Burundi and the Gambia have similar national political conditions.

Burundi, the first to announce its intention to withdraw from the court, began its descent into turmoil following the decision last year by President Pierre Nkurunziza to seek a controversial third presidential term which he won.

Burundi has since experienced domestic political unrest, including an unsuccessful coup attempt to which the leadership has responded by cracking down on dissent.

A massive refugee crisis has resulted from the generalised fear and insecurity. In April, the Prosecutor of the ICC, Fatou Bensouda, announced a preliminary examination over Burundi, the stage before a formal investigation is considered, following reports that more than 400 people had been killed in the violence.

Burundi’s decision to withdraw can easily be explained as a measure to counter the threat of a possible ICC prosecution.

The Gambia also faces a difficult domestic situation. Having taken power 22 years ago in a military coup, President Yahya Jammeh has come under increasing pressure to leave office, surviving several coup attempts, the last one in 2014, to which he responded in a particularly repressive manner.

Jammeh has reacted to popular protests against his reign with arbitrary arrests, forced disappearances, torture and unlawful killings and has presided over the decimation of independent media. Eight people implicated in the last coup attempt were put on a secret trial and sentenced to death.

While South Africa has not reached the low depths into which Burundi and the Gambia have sunk, the country has had its share of domestic disharmony in which the accusations of corruption against the ruling African National Congress and President Jacob Zuma personally have played a central role.

In what has been regarded as a tectonic shift in the country’s politics, the ANC lost control of Pretoria and Johannesburg during the municipality elections that took place last month, an outcome that was interpreted as an expression of public anger over the ANC’s reputation for corruption.

South Africa has tried to justify the decision to leave the ICC, explaining that the Rome Statute hindered its ability to mediate some of the conflict situations in Africa as it cannot engage meaningfully with people who it is being forced to arrest.

On its part, the Gambia announced that it was withdrawing from the “International Caucasian Court”, mirroring previous accusations within the African Union, that the ICC was involved in a race-hunt against Africa.

The Gambia happens to be the country of origin for the ICC prosecutor, and its decision to withdraw reflects a failure to appreciate the bigger picture that its decision involves.

Whereas the prevailing domestic situations in Burundi and the Gambia largely explain the decision by the two to quit the ICC, the personal eccentricities of the presidents of the three countries is also a shared factor that explains what the three countries have done.

The leading role played by President Uhuru Kenyatta in what has matured into the three countries leaving the ICC makes Kenya interesting to watch.

The death, in 2011, of President Muammar Gaddafi, who had led the AU line resisting the ICC, left this lobby without a clear leader. When he assumed office in 2013, and with charges against him before the ICC, President Uhuru Kenyatta soon established himself as the new leader of the anti-ICC lobby, calling for a mass walkout by African countries during the tumultuous extraordinary AU summit held that year.

Now that the three countries have fulfilled President Kenyatta’s wishes, it remains to be seen if he will also lead Kenya into joining the exodus.

While Kenyatta has already secured the approval of his party, and that of the Kenyan legislature, for a possible withdrawal from the ICC, and whereas a Bill seeking a repeal of the International Crimes Act has made progress in the National Assembly, it will not be easy for Kenya to pull out of the ICC.

In retrospect, and contrary to what they had promised during the campaigns, the Jubilee leaders have used their official positions to advance a personal agenda of defending themselves against the charges that they faced before the ICC when they came to power.

At the same time, President Kenyatta’s leadership is facing growing domestic disapproval from a public that is dismayed at the inability of the President to address grand corruption, which has blighted his leadership.

The unaddressed corruption reduces the President’s capacity to steer the country on controversial questions like the ICC. The three presidents that have pulled their countries out of the ICC have a rogue image both internationally and in their countries.

President Kenyatta would have to decide whether, in addition to the unaddressed domestic problems, he would also like to be seen to be keeping the company of the three.

A Kenyan outside the head quarters of the International Criminal Court in The Hague, the Netherlands on October 31, 2013. PHOTO | BILLY MUTAI | NATION MEDIA GROUP Why it won’t be easy for Kenya to pull out of ICC By By GEORGE KEGORO The world is struggling to understand the meaning of the decision by