Why cancer should be declared a national disaster in Kenya 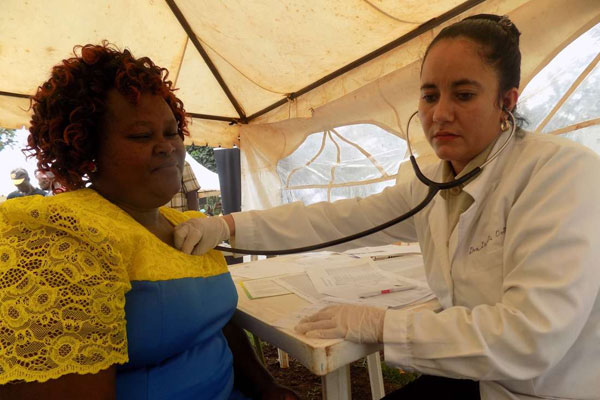 Why cancer should be declared a national disaster in Kenya

From scarcity of specialists and diagnostic equipment … to availability of drugs in the market and lack of finances, cancer treatment in Kenya faces several challenges.

There are currently 30 oncologists in the country against a population of 48,000 cancer patients, with the number rising at an alarmingly rate. Most of them are based in Nairobi, and citizens in remote areas have to travel longer distances to get treatment, which sometimes delays for months and even years, depending on the time of booking.

The waiting causes previously curable tumours to advance to incurable stages while some patients die while on the waiting list.

In Kenya, cancer is treated through medical, surgical, and radiation therapies such as radiotherapy and chemotherapy to kill the cancerous cells and prevent them from spreading.

Kenya boasts 12 radiotherapy machines, of which KNH has three while the rest are in private hospitals. However, with only one radiotherapy centre at KNH, the country’s cancer management is limping.

Nairobi hosts some of the best cancer hospitals in the country. The cost of cancer treatment varies from Sh500,000, depending on the type of cancer being treated, to over Sh1 million.

Many Kenyans are not able to afford the treatment even in public hospitals. This explains the unacceptable high annual mortality rate of 28,000. Globally, cancer causes more deaths than HIV, TB and malaria combined.

Some 70 per cent of the global cancer burden is in low and middle-income countries. In Kenya, cancer is now the third leading cause of death and second among non-communicable diseases, accounting for seven per cent of overall mortality rate.

The annual incidences are estimated to be 47,000 new cases with an annual mortality rate of 28,000.

Although cancer is curable, unfortunately 70-80 per cent of patients are diagnosed with the disease when it is at an advanced stage, with a high incidence of misdiagnosis and inadequate screening hindering early detection.

With the inclusion of cancer in the National Health Insurance Fund, many Kenyans are hoping to get the services affordably. Is there anything you can do to lessen the chances of getting cancer?

Cancer risk factors include exposure to chemicals or other substances, as well as certain behaviours like smoking. They also include things people cannot control, like age and family history.

A family history of certain cancers can be a sign of a possible inherited cancer syndrome.

Cancer happens when normal cells change so that they grow in an uncontrolled way. This uncontrolled growth causes a tumour to form. This could be triggered by several factors.

The biggest risk factor for most cancers is age, and most people diagnosed are over 60.

Other factors include lifestyle habits, hormones, cancer-causing substances (chemicals), chronic inflammation, diet, hormones, immunosuppression and infectious agents; but the majority of cancers, including prostate, have no known cause.

It is not possible to explain why some people develop cancer and others do not, hence there is no certain way to prevent one from contracting this deadly disease.

However, there are things one can do to reduce the risk, for instance, stop smoking as it is not only linked to lung cancer but also other forms of cancer.

Always eat a well-balanced diet, rich in all the nutrients, and exercise at least 30 minutes or more for most days of the week. Weight should be kept stable as being overweight may heighten your risk of cancer.

Consume alcohol in moderation and one should also ensure they get immunised to prevent specific virus that amplifies the risk of cancer such as the human papillomavirus (HPV).

Other experts advise people to avoid excessive sun exposure by wearing protective clothes, using sunscreen or staying in a shade to prevent skin cancer. The role of mental health in managing cancer.

DIAGNOSIS
Cancer diagnosis can at times disrupt someone’s life. The trauma of one receiving the results of cancer positive can lead to mental health challenges, more so during times when balance in life is difficult to maintain.

According to the World Health Organisation, mental health is defined as “a state of well-being in which every individual realises his or her own potential, can cope with the normal stresses of life, can work productively and fruitfully, and is able to make a contribution to her or his community”.

“Cancer doesn’t just affect you physically. It can affect every aspect of your life, including your role in your family, your relationships, your work life, and even your identity,” says Elissa Kolva, PhD, University of Colorado, Cancer Centre researcher.

Combine emotional distress with other elements of a cancer diagnosis such as treatment and the tough side effects and you have a recipe for any number of mental health challenges.

“Although there are many mental health problems that a patient with cancer may experience, anxiety and depression are the two biggest challenges. These can affect nearly all aspects in their quality of life from the ability to sleep to the motivation to go and do things they once enjoyed. It can be very debilitating,” says Kristin Kilbourn, PhD, psychologist and CU Cancer Centre investigator.

Many experts have estimated that 22 per cent to 29 per cent of patients with cancer will experience depression. Patients once diagnosed, they always feel hopeless and lose interest in life.

According to a study from the Journal of the National Cancer Institute, cancer survivors who are depressed are twice as likely to die prematurely as those who are not depressed.

Once depressed, the patients going through cancer treatment are four times at risk of suicide. According to the University of Colorado Cancer Centre, mental health screening after diagnosis or after treatment is important to lower stress and anxiety during the cancer experience.

“Engaging in hobbies and interests that bring about joy and happiness, asking for and accepting social support, getting enough sleep, maintaining a healthy diet, limiting intake of alcohol and other substances, engaging in regular activities and pacing and prioritising, are some of the things that patients can do to reduce stress,” says the centre.

It recommends two coping strategies to patients, including problem-focused and emotion-focused.

The two work well when stress is controlled and the stressor is out of control.

“If a patient is finding that coping strategies are not effective, professional assistance via counselling or “talk” therapy, group therapy and/or considering medical intervention such as an antidepressant medication may be beneficial,” says the centre.

Why cancer should be declared a national disaster.
“I am looking forward to the day cancer will be recognised as a national disaster, and given the same priority we give Aids,” says Gacheche Waruingi, Kenya Prostate Cancer Support Group.

He adds: “Cancer has claimed many lives; it is high time the government looks at it seriously with a different eye and allocates more funds than what is being allocated now.”

Dr Githinji Gitahi, Amref Africa CEO, says, “Cancer is like terrorism. It is noisy, emotive, and steals headlines. Many people are dying of cancer. Let’s build a primary healthcare system that prevents cancer, and other deaths.”

Dr Sitna Mwanzi, a consultant oncologist and chairperson, Kenya Society of Haematology and Oncology (Kesho), says that an increase in specialists would mean early detection of cancer, proper screening and quality palliative care for the patients.

Mr David Makumi, a member of the National Cancer Institute board, says cancer gets prominence “only when a big person dies. If declared a disaster, at least actions will be taken the same way as HIV/Aids. At least our people will get free medication,” he said.

The 2009 National Policy for Disaster Management in Kenya, defines a disaster as a serious disruption in the functioning of a community or society, causing widespread human, material, economic or environmental losses which exceed the affected community’s ability to cope using its own resources.

Ms Elizabeth Odawa, whose mother died of cervical cancer two years ago, has never known happiness. She was left with huge debts to pay after she sold all the property that her mother had worked tirelessly to own.

Why cancer should be declared a national disaster in Kenya Reviewed by samrack on November 9, 2019 .

Share thisFacebookTwitterPinterestEmailWhatsAppCuban doctor Dainelis Ortega examines a patient, Jackline Munee, at Runyenjes Hospital during a free cancer screening clinic organised by the Embu County government on November 8, 2019. PHOTO | GEORGE MUNENE | NATION MEDIA GROUP Why cancer should be declared a national disaster in Kenya From scarcity of specialists and diagnostic equipment …