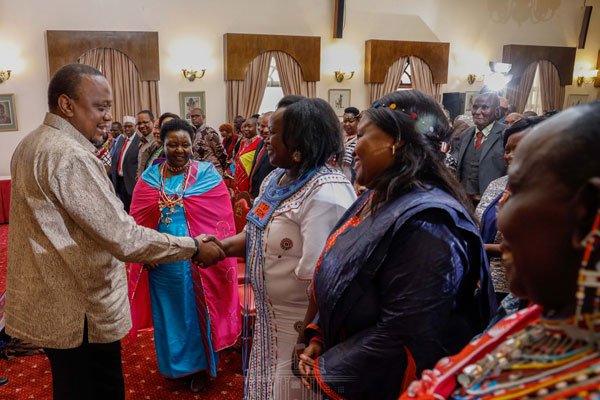 President Uhuru Kenyatta at State House in Nairobi on November 8, 2019 during a meeting with community elders and religious leaders on eradicating FGM in Kenya by 2022. PHOTO | PSCU

Community elders and religious leaders from across the country on Friday committed to end Female Genital Mutilation (FGM) in Kenya by 2022.

The leaders made the commitment at State House, Nairobi, during a meeting with President Uhuru Kenyatta and First Lady Margaret Kenyatta.

“We appreciate the government’s efforts to end FGM through creating and implementing progressive policies and legislative frameworks and programmes towards its eradication,” said Njuri Ncheke Secretary-General Josephat Murangiri, who read the elder’s declaration.

As part of their anti-FGM efforts, the elders said they would work with both the national and county governments and other stakeholders in creating awareness on the need to promote education and the wellbeing of the girl child.

President Kenyatta thanked the elders and religious leaders for agreeing to lead the onslaught against the retrogressive practice and assured them of the government’s backing.

The President termed FGM an archaic cultural practice that assaults the wellbeing of individuals and society, and pitched for its complete eradication.

“FGM is a retrogressive practice whose continued existence in our country, in actual fact, assaults our individual and our national consciousness,” he said at the ceremony that was used to launch the national policy on the eradication of FGM.

“The practice is inimical to our shared fundamental values as enshrined in our very own constitution that we as Kenyans passed.”

The President called on Kenyans to shun destructive practices such as FGM and embrace progressive cultural activities that bestow honour and dignity on women and girls.

“A time comes when one gets exposed to newer ways of life. It is time therefore for all of us to discard retrogressive cultures for the benefit of the nation,” the Head of State said.

He tasked government officials in the ministries of gender, education, health and public administration to take the lead in championing government efforts aimed at ending FGM in all parts of the country.

“If you find any government official, whether a chief or assistant chief, who supports this retrogressive culture, inform relevant offices so they are dealt with firmly.”

The President cautioned cross-border communities against escaping to neighbouring countries to undertake FGM, saying he and his counterparts were discussing how to deal with offenders in other jurisdictions.

Dr Ademola Olajide, the County Representative of the United Nations Population Fund, said FGM is one of the initial violations of the rights of women and girls.

Dr Olajide further noted that FGM has serious economic and health consequences on the victims.

He thanked the President and First Lady for their leading roles in the fight against the practice and assured them of the organisation’s full support in ensuring the country ends the practice by 2022.

Gender Cabinet Secretary Margaret Kobia commended the First Lady for her outstanding contribution to the promotion of maternal and child health, and to safeguarding women against consequences such as obstetric fistula through the Beyond Zero Initiative.

The President and First Lady Margaret Kenyatta were given special beaded bracelets for their efforts to end FGM in the country.

Share thisFacebookTwitterPinterestEmailWhatsAppPresident Uhuru Kenyatta at State House in Nairobi on November 8, 2019 during a meeting with community elders and religious leaders on eradicating FGM in Kenya by 2022. PHOTO | PSCU  Heeding Uhuru’s call, elders pledge to end FGM by 2022 Community elders and religious leaders from across the country on Friday committed to