Where are Kenya‘s super rich? None in Forbes list 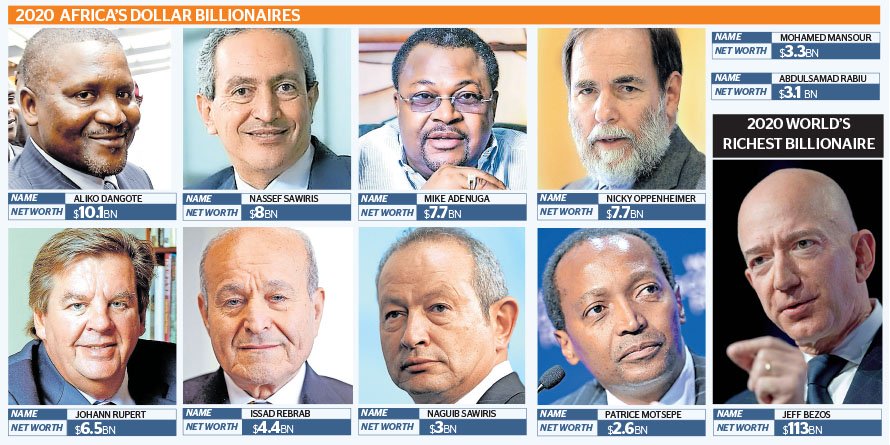 Where are Kenya‘s super rich? None in Forbes list

Kenya’s super-rich are missing from the list of Africa’s dollar billionaires, as Forbes magazine published the list of the continent’s wealthiest individuals.

Although the number of countries with dollar billionaires in Africa has increased from four to eight over the past decade to 2020, this year there was not even one Kenyan in the list of Africa’s 20 richest men and women.

Although Kenya is East Africa’s biggest economy and the eighth largest in Africa, it has been left behind by neighbouring Tanzania, which has one dollar billionaire – Mohammed Dewji.

Mr Dewji, 44, was ranked the 16th wealthiest man in Africa with a $1.6 billion fortune in textile, flour milling, beverages and edible oil. In October 2018, he was kidnapped at gunpoint in Dar-es-Salaam, Tanzania’s capital, and released after nine days.

Egypt and South Africa have the highest number of dollar billionaires with five each, followed by Nigeria (four) and Morocco two. Nigeria’s Aliko Dangote is the richest man in Africa, with an estimated net worth of $10.1 billion (Sh1 trillion) built from sugar, cement and flour industries. The world’s richest man is Jeff Bezos, founder of Amazon, with a networth of $113 billion. His wealth has increased in recent weeks as rules on social distancing helped his e-commerce giant to grow by eliminating the need for shoppers to physically visit outlets. Mr Bezos has been ranked as the richest man for three years in a row.

The richest woman in the world is Alice Walton, heir of the Walmart supermarket chain fortune. She is the ninth richest person globally with a worth of $54.4 billion.

Africa has 20 dollar billionaires, according to this year’s Forbes rich list that based individual’s net worth of mainly using stock prices and the prevailing exchange rate. Their wealth was calculated on certain dates.

The magazine’s past rankings have been hotly disputed with various individuals claiming to either have more or less wealth than estimated by Forbes researchers.

For instance, when Bidco’s Vimal Shah was listed as Kenya’s richest man in 2013 with a networth of $1.6 billion, he dismissed the report as untrue. He was later dropped from the list. Forbes later said it dropped him after landing on new information that led the magazine to attribute the wealth to Bidco’s founder and Vimal’s father, Bhimji Depar Shah and family, not Vimal the individual.

President Uhuru Kenyatta, who was included on the inaugural list in 2011, was dropped the following year and is no longer included because he is not seen as the custodian of the Kenyatta family’s wealth, then estimated at more than $500 million.

Nigeria-based Ventures financial magazine tipped Manu Chandaria as the wealthiest man in the country and 25th richest on the continent with a fortune of $1.65 billion in 2013.

It placed the fortunes of Nicholas Biwott and Naushad Merali, who both made their money during the era of President Moi, at about $1 billion (Sh86 billion). Other super-rich Kenyans include industrialist Chris Kirubi and the family of the late Philip Ndegwa, a former CBK governor. Mama Ngina Kenyatta has in the past made it to the rich list.

This year, Isabel Dos Santos, daughter of former Angolan president Edwardo dos Santos, was named as Africa’s richest woman with a net worth of $2.2 billion.

Investment managers say the ability of the rich to hide wealth in investment vehicles such as nominee accounts, shell companies and the weak disclosure rules in Kenya, make it difficult to truly ascertain the worth of Kenya’s wealthy.

Most use proxies to own large stakes in listed companies, land and commercial property in key towns across the country.

Besides, a high proportion of Kenya’s rich have stashed their wealth in tax havens like Switzerland, Singapore, Luxembourg and the Cayman Islands.

Where are Kenya‘s super rich? None in Forbes list Reviewed by samrack on April 15, 2020 .

Where are Kenya‘s super rich? None in Forbes list Kenya’s super-rich are missing from the list of Africa’s dollar billionaires, as Forbes magazine published the list of the continent’s wealthiest individuals. Although the number of countries with dollar billionaires in Africa has increased from four to eight over the past decade to 2020, this year