We will provide security, stay in Nairobi and vote – Uhuru 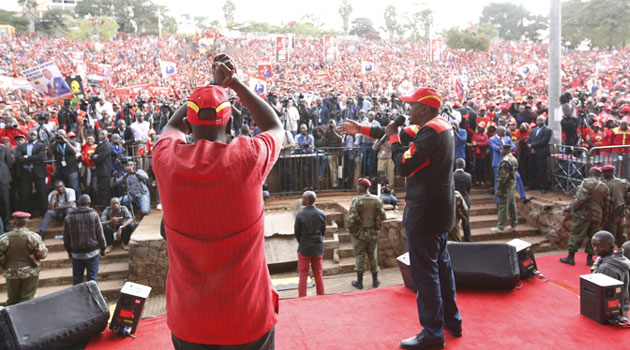 We will provide security, stay in Nairobi and vote – Uhuru

Uhuru Park turned red after the Jubilee brigade ‘raided’ the historic ground to affirm their support for President Uhuru Kenyatta and his team, three days to the General Election.

Thousands of Jubilee supporters donning the party’s colours waved placards with messages of goodwill to the President.

It was also a chance for the politicians to learn a few dance moves as the emcees engaged the crowd, which had arrived at the park as early as 8am, way before the arrival of the President and his Deputy William Ruto.

And on their arrival, it was serious business as the duo highlighted some of the development projects they have undertaken but peace messages dominated their speeches.

“Stay put within the city for you to have a chance to exercise your democratic right,” was the message by President Kenyatta on Friday.

Addressing thousands of jubilant supporters, President Kenyatta urged city residents not to fall to those “fear mongering” saying he shall “ensure every person is safe.”

It was during what was termed as a “mega rally” that President Kenyatta also urged Kenyans to give him a second chance, for him to be able to carry on with the Jubilee development agenda.

The President who led other Jubilee aspirants in the city expressed optimism of clinching the highest number of votes by more than 2 million.

The Head of State emphasised the need for Kenyans to vote peacefully.

“I want you all to assure me that you shall turn out in large numbers to vote and then proceed home, shake your neighbour’s hand and wait for the outcome together,” the President said.

As characterised in most of the campaign rallies, the President highlighted some of the projects he has started during the four years he has been in power ranging from the Standard Gauge Railway, roads network, the last mile connectivity of electricity among others.

The President said in the last four-and-a-half years, Jubilee has made a lot of progress in providing solutions to challenges facing Kenyans ranging from the land question where over 3.5 million title deeds have been issued to the creation of over 2.5 million quality jobs for the youth.

“We have now put in place an action plan that we intend to implement in our second term to create 6.5 million quality jobs for Kenyans in the next five years. That is why it is important for Kenyans to vote for Jubilee,” President Kenyatta said.

On previously marginalized regions, President Kenyatta said the Jubilee Government has made strides in opening up the areas that lagged behind in development by stepping up investment in key projects, offering services that are uplifting the lives of people in those regions.

Deputy President Ruto on his part said the Jubilee Party deserved to win another term based on its development record.

“Do you want stories or development to continue?” the DP asked a crowd.

In 2013, the UhuRuto ticket won with more than 800,000 votes but this time, the Deputy President says, “we are going to win with more than a million votes so that those who are fond of going to court and calling for protests can have nothing to say.”

Both the President and his Deputy asked their supporters to vote for Jubilee candidates more so for Senator Mike Sonko who is vying for the gubernatorial position.

“Please, vote for a Governor who can listen to your needs,” President Kenyatta said with the
sentiments shared by his deputy, who also paraded all other contestants from the position of the Member of County Assembly to Governor for endorsement.

If elected the Governor, Sonko promised to reduce the tax while he will exempt small traders.

Sonko got a boost after former Starehe MP Bishop Margaret Wanjiru endorsed him saying this time, “we don’t want to make a similar mistake like we did in 2013. We shall support Mike Sonko.”

On Saturday, the National Super Alliance will hold their final rally in the city, while Jubilee heads to Nakuru.

We will provide security, stay in Nairobi and vote – Uhuru Reviewed by samrack on August 4, 2017 .

Thousands of Jubilee supporters donning the party’s colours waved placards with messages of goodwill to the President/PSCU We will provide security, stay in Nairobi and vote – Uhuru Uhuru Park turned red after the Jubilee brigade ‘raided’ the historic ground to affirm their support for President Uhuru Kenyatta and his team, three days to the