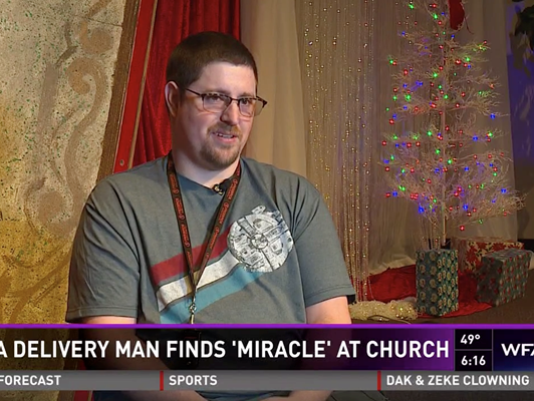 Devin Cammack had no idea what was in store for him when he arrived to work on Sunday.

The 31-year-old pizza delivery driver had been called into work early and was dispatched to Victorious Life Church in Lewisville. Slightly confused by the directions, he arrived early and waited patiently at the rear of the church.

Cammack was then called to the stage during a Christmas play by the lead character played by David Hira, who as part of the script, had ordered a pizza.

“He came down the aisle,” Hira said, “I sat him down and said, ‘There’s something big going on in your life, you have a life-changing event coming up.’”

He was then asked to share his story with the congregation.

Two years ago, the father of three was diagnosed with end-stage heart failure. He would need a pump implanted into his chest that does 90% of the resting workload of the heart. Because the pump needs 24-hour power, Cammack has to wear a battery pack when he is out of the house, and must be plugged in when home.

“I need this to live,” Cammack said, patting the pack. “And medication.”

After sharing his story on stage, the magic started.

“The world is good.it is full of goodness and kindness and people are just waiting to be able to express that in some way and be witness to that,” said Cammack. “It was phenomenal.”

But there’s more. On Monday, Devin got word from his doctor that he no longer needs a heart transplant because his treatment is working and his heart is beginning to return to a more manageable size. He will still require his implant for a while longer and lifelong medication.

“It was amazing, one of the most humbling experiences in my life,” he said. “It really truly was.”

The church’s worship leader, Noel Pearce, who wrote and directed the event, said the generous tip was spontaneous.

“I was like, wow, this is the true meaning of Christmas,” he said, adding that he wanted the play to spread the message about the gift of giving.

Noel also had a hand in getting Cammack to the church that Sunday. When he contacted a nearby Pizza Hut to set up the order, he chatted with the store’s manager and asked for help. On Saturday, another driver was given around $300 to help replace what taken when his wallet was recently stolen. Adding to Sunday’s collection were students from the Lewisville High School choir who were waiting in the wings until their performance.

“When the kids started coming out and wanted to give, it was so touching,” Pearce said. “It was truly an amazing moment just to see all those people give.”

Cammack said the unexpected donation has allowed him to fix his car and pay rent early. The gift lifted the burden, if ever so slightly, of living paycheck to paycheck, and paying out-of-pocket for his health insurance.

Share thisFacebookTwitterPinterestEmailWhatsAppWATCH: Pizza Delivery Man with End-Stage Heart Failure Finds Miracle at Texas Church Devin Cammack had no idea what was in store for him when he arrived to work on Sunday. The 31-year-old pizza delivery driver had been called into work early and was dispatched to Victorious Life Church in Lewisville. Slightly confused by