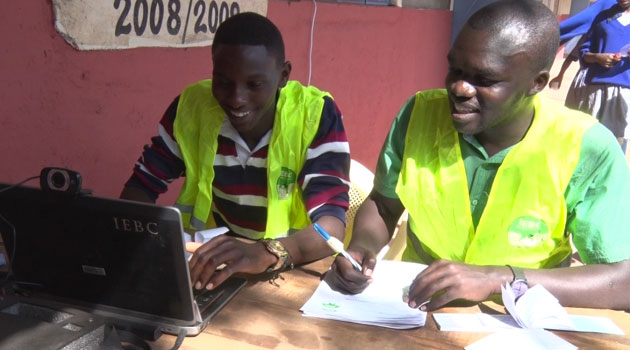 The last phase of the 2017 Mass Voter Registration (MVR) kicked off on Monday with most centres recording a high and unexpected turnout on day one.

At Githunguri Primary School Centre in Ruiru, the Independent Electoral and Boundaries Commission (IEBC) clerks had recorded about 30 voters by early afternoon.

“People have showed up in good numbers and the process has gone on smoothly,” Claid Arua, a clerk explained.

Compared to past MVR exercises, voters seemed to have been convinced to turn up in large numbers in 2017.

According to IEBC, there are nine million Kenyans who had not registered as voters of which the commission was hoping to get between four million to six million voters.

Political parties including the ruling Jubilee Party and the Opposition adopted voter registration as the basis of their campaign lines as they use every opportunity to woo their supporters to register as voters, a drive that may see IEBC surpass its target of registering about six million voters.

Those who turned up to register said the process was easy and fast, making it convenient for them to pop into their registration centres and resume their businesses.

“This process has been very easy. I have come with my family, I have registered and now I have my voter’s card. It’s important to have a voter’s card,” a voter in Ruiru told Capital FM News.

“Ninatambulika. (I am registered) Are you? Let’s see,” a social media post attracted a trail of other users making it look like a contest.

Others went on even to advise social media users to send their ID Numbers to 22464 to check if they were registered.

In Vihiga County, it was made mandatory for people to register as voters before getting seeking for services at public offices. Only patients were exempted from the directive.

READ: No services if you are not a registered voter, Vihiga Governor orders

The exercise launched on Monday will go on for 30 days.

In the 2013 General Election, IEBC had registered 14.4 million voters, a target that it deemed unsatisfactory hence its efforts to hit its target of 22 million voters for the next election.

But with the enthusiasm witnessed from the Kenyan society including the political divide, IEBC could be lucky to witness over 22 million voters participate in the August General Election.

Share thisFacebookTwitterPinterestEmailWhatsAppVoter listing ahead of 2017 poll gathers momentum By JUDIE KABERIA The last phase of the 2017 Mass Voter Registration (MVR) kicked off on Monday with most centres recording a high and unexpected turnout on day one. At Githunguri Primary School Centre in Ruiru, the Independent Electoral and Boundaries Commission (IEBC) clerks had recorded about